Book Review: Across the Waves from Radio Caroline to Classic FM 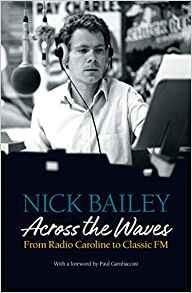 Nick Bailey (b.1947) was the first presenter to be heard when Classic FM (a UK national commercial classical music station) started up in 1992. He remained with the station for 25 years until he retired in 2017. https://www.classicfm.com

Nick was born and grew up in London, in what may be termed a Bohemian environment. His father was the actor Robin Bailey, and his mother had also worked in the theatre. He went to a French school in London and was brought up by a series of au pairs. From 1958 to 1962, the family moved to Australia, where his father played Prof. Henry Higgins in a touring production of My Fair Lady. The family returned to England and Nick found a job in a theatre company, first in Plymouth and then in London.

Nick had enjoyed his childhood years in Australia. Therefore, in 1968, he emigrated there on the £10 assisted package scheme. After a brief spell working in a factory, he got his big break as a presenter with a rural station, 2VM Moree, 400 miles northwest of Sydney. This station is still broadcasting on 1530AM.
Nick wanted to gain more experience in broadcasting and moved to Townsville, on the Queensland coast, to work for 4AY (now Hit 103.1). He then tried his hand at working in an island resort and in a bookshop in Sydney, before returning to the airwaves at 4BH Brisbane, 882AM.
http://www.2vm.com.au
https://www.hit.com.au/townsville
https://tunein.com/radio/Macquarie-Sports-Radio-882-s16561

This book really captures the excitement and enthusiasm of working in radio at a time before it became a glamorous, and hard-to-access, profession. Nick had not done very well at school but possessed a good speaking voice and had a real interest in communications.

After four years in Australia, he moved to the then British colony of Hong Kong, where he worked for the English service of Radio Hong Kong. In 1973, he returned to the UK where he landed a job with BFBS and was posted to Gibraltar. This was the beginning of a nine-year career in Forces broadcasting, which also took him to Cologne (Köln) and Berlin in Germany, and eventually back to Hong Kong.

Nick paints a vivid picture of the ex-pat officer class broadcasters, who led a ‘charmed’ life, interviewing visiting dignitaries and entertaining the troops in the far-flung parts of Britain’s diminishing number of colonies. He could have stayed with BFBS, but his heart was in being a presenter, rather than a manager.

Nick decided that his future was in Hong Kong and he remained there until 1992. During his 10-year spell there, he started some television work, became the Hong Kong correspondent for BBC Radio 5 and became Head of Radio 3, Hong Kong.

He could have progressed to senior management but decided to return to the UK.

Much had changed over the years, and the UK now possessed an extensive network of commercial stations. In 1992, several new stations were launched, including Classic FM. Nick had an interest in classical music and shared the vision of the station’s founders that there was a market for classical music presented in the style of popular music. Classic FM had a policy of recruiting experienced radio presenters, rather than classical music experts.

He applied for a job with the new station and ended up presenting the prestigious Breakfast Show.

Classic FM became an immediate success, getting 4.3 million listeners within the first three months, which was double the listenership of BBC classical music station Radio 3.

Nick presented a variety of different programmes during his 25-year tenure with the station, which continued to grow in popularity. He remained true to his roots as a presenter and never chose to climb the slippery ladder of management.

This is an extremely entertaining and very readable book. Unlike many self-published books, this book has benefited from being professionally edited. It is also well illustrated, with many photographs spanning Nick’s 50 years in broadcasting. This title is highly recommended to anyone wishing to gain an understanding of what it is like to work as a radio presenter.

Tean and Biscuits with Tim Kirby

The Best Radio Museums in the UK and Abroad

A New Digital Handheld from Icom

A New SDR from the Far East