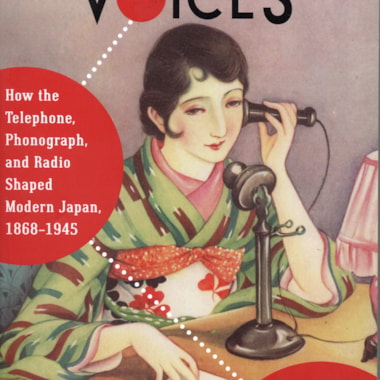 Electrified Voices is a well-researched book, which looks at the early days of Japan’s telecommunications, recording, radio and film industry. The author is a cultural historian, and his key argument here is that recorded, or transmitted sound was as transformative as any aspect of visual culture.

Japan is a country associated with the electronics industry and has produced many famous firms, including Akai, AOR, Hitachi, Icom, JRC, Kenwood, Panasonic, Sony and Yaesu. With some earlier exceptions, Japan was a closed country until the middle of the 19th Century when first trading contacts with the West were established. The introductory chapter is densely written, and the author lays out his analytic framework. He provides some useful information about how the Japanese language was not unified, in either the spoken or written form, until the 19th Century. This turned out to be a crucial element in building a nation.

Despite more than 250 years of relative isolation during the Edo period (1603 – 1868), Japan caught up fairly quickly with new technologies developed in Europe and the USA. The first telegraph system was established between Tokyo and Yokohama in 1869. By 1871, an undersea cable connected Japan with China and the rest of the world. The telephone arrived by 1890. At that time, Japan was not always a country that innovated and came up with new inventions, but a nation that imported proven technology.

Japan has a rich musical culture using traditional instruments such as flutes, lutes and drums. The author makes the point that music is not a universal language and that Japanese music, like other Eastern forms of music, can sound discordant to Western ears.

In 1879, the first wax cylinder phonograph was imported into Japan. It was slow to take off. However, by 1899, ‘phonographs’ were widely sold, and people could buy wax cylinder recordings of Japanese and Western music.

Radio arrived in Japan in 1925. Initially, it was run by private firms and licenced by the government.  However, by 1926, Nippon Hōsō Kyōkai (Japan Broadcasting Corporation), known as NHK, was formed, using the model of the BBC as a public corporation. NHK, like the BBC, is still the major broadcaster, running two national networks on AM and FM. NHK World runs a short wave service broadcasting in 18 languages.

Yasar investigates some of the early programmes broadcast in Japan, including physical exercise programmes, which were seen as an important part of nation-building. A second major challenge to radio was sports broadcasting, especially the challenge of capturing live action on the radio. Print journalists would not necessarily be able to adapt to this new format, and the new profession of ‘sports broadcaster’ was born.

The author makes an interesting point about the role of the Emperor of Japan, whose voice was never broadcast until Japan’s surrender to the Allies in 1945. He was considered a deity – above broadcasting.

There is a detailed chapter on Japanese radio drama and the challenges faced in broadcasting what was then seen as a ‘visual’ art form. One of the first radio drama broadcasts was a translation of the BBC radio drama, Danger by Richard Hughes. One of the challenges faced by early broadcasters was finding actors with distinctive voices who would stand out on the radio. There was also an issue about using regional accents, which might alienate some listeners.

Yasir is particularly interested in the film industry. He looks at the transition from silent films to the ‘talkies’, which began in 1927 with a film called Daybreak. He discusses the art of sound design for the cinema; this created a host of new professions, including sound technicians and special effects designers.

This is a surprisingly interesting book, covering a wide range of cultural forms and their evolution in 19th and early 20th Century Japan. Japan’s rise to the position of a ‘high-tech’ nation did not occur until after the Second World War, but this book does offer an insight into the way in which a previously inward-looking country embraced new technology enthusiastically.

Kerim Yasar is an assistant professor of East Asian Languages and Cultures at the University of Southern California. He originally studied music and went to Japan to teach English. He then learnt Japanese and began his postgraduate studies.