David Harris reviews a captivating new autobiography of Noel Newsome (1906-1976), the Director of the BBC’s European Service during the Second World War. 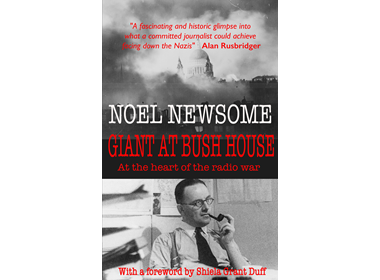 Noel Newsome held a pivotal position in directing the way in which Britain communicated to the people of occupied Europe and the Axis countries. He commenced this autobiography shortly before his retirement, and he finished writing it before he died. However, his family never got around to having it published, until now.

Noel was the son of a doctor and grew up in an affluent family. The first 100 pages follow the usual trajectory of establishment figures of the time, by detailing his experiences at prep schools, public school and Oxford University. The book really comes to life when he gets to Oxford, where he leads a very colourful bohemian and athletic life indulging in both sport and women.

After graduating with a First in History, he uses his family connections to get a job as a reporter with the Bristol Times and Mirror. He starts to write opinion pieces and scoops a story about the splitting of the atom.  The newspaper closes in 1932, but he starts up a new paper, Bristol Evening Post.

Newsome soon outgrows the provincial press and moves to London to work for the Daily Telegraph. He is a liberal and opposes the rise of Hitler and Japanese intervention in Manchuria. After a year, he moves to Malaya (now Malaysia) to become the editor of the English-language Malay Mail. He paints a very colourful picture of ex-pat life in the tropics, including encounters with prostitutes, which is perhaps a little surprising, given that he took his wife with him to Malaya. Newsome’s frankness about his complex personal life may be a reason why publication was delayed until everyone mentioned in the book was long dead.

In 1935, he moves back to England and to his job on the Daily Telegraph. He continues to oppose the appeasement with Hitler which is not always popular with the editorial team of this right-wing paper.

In 1939, completely out of the blue, he is seconded to the BBC to head up the newly formed European Service. This seems a very bold move, considering that he had no broadcasting experience. Initially, there were only 30 staff, with broadcasts in German, French, Italian, Arabic, Spanish, and Portuguese.

By 1941, the BBC European Service had expanded to 500 staff, broadcasting in 20 languages with 36 hours a day of broadcasts on LW, MW and SW. English was also added and proved to be very popular, not only in occupied Europe but also in the UK. Newsome describes the BBC Home Service as pessimistic, whereas he felt he tried to present an accurate, but more optimistic, presentation style of how the war was going.

Newsome operated at the highest level within the BBC and the wartime establishment. He opposed the spreading of false news which he saw as being counterproductive. He had the ear of Churchill whom he strongly supported despite his own liberal convictions. He arranged for General de Gaulle to broadcast to France but was most proud of the Italian Service. He writes that this service made a real contribution to the demoralising of the Italians and their eventual decision to change sides and support the Allies.
Newsome was in constant conflict with the Foreign Office and often broke news before it was officially confirmed.  In 1941, he started the V for Victory Campaign, with all broadcasts beginning with the first four notes of Beethoven Fifth Symphony – which, in Morse code, spell out the letter ‘V’ (…_).
(For more on this, see also my review of V for Victory by David Boyle, in RadioUser, October 2016:15).

The book is also a detailed account of the progress of World War Two, as seen through the eyes of a senior BBC official living in London throughout the Blitz and the V1 and V2 attacks. The author writes about the difficulty in keeping so many different language services on course and ensuring that consistent messages are sent out to different countries.

In 1944, in the aftermath of D-Day and the Allied invasion, Newsome is sent to SHAEF (Supreme Headquarters Allied Expeditionary Force) Paris, and then to Luxemburg where he used the powerful Radio Luxemburg transmitters to broadcast to Germany.

The book concludes with an interesting chapter about a trip to Germany.

After the war, Newsome was told that he was too much of a campaigner to continue working for the BBC. He stood unsuccessfully as a Liberal candidate in the 1945 election. He worked as Director of Recruitment and Training at the Ministry of Fuel and as Director of Public Relations for the National Coal Board. In this context, he made a short film about coal mining, which can be viewed on the website of the British Film Institute (BFI): https://player.bfi.org.uk/free/film/watch-weve-got-what-it-takes-1947-online

A Family Reunion in the Editor's Shack

The most up-to-date listing of European Non-Directional Beacons.

Check out these indispensable titles

The Tuning Knob is Back

Tune in here for Covid-19 Updates

New Visitor Policies at the BBC

An Easy Way to Receive NAVTEX