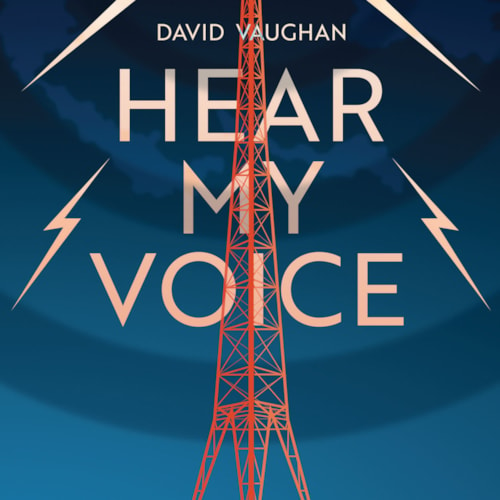 David Harris reviews a historical radio novel, set around the time of the German annexation of the Sudetenland and comments on the author’s narrative technique of using excerpts from contemporary radio broadcasts.

Buy your copy of Hear my Voice directly from us here

The text on the back of this novel summarises its chilling premise: “International diplomacy has stopped working. A new breed of authoritarian ruler has emerged, contemptuous of the rules of diplomacy and collective security, and willing to lie and bully to build power and influence. Europe's democracies are confused and defensive. It is 1938 and Germany is putting pressure on Czechoslovakia.”

This slim novel is set in Czechoslovakia in 1938, just prior to Germany’s annexation of that country. The author is a former BBC Prague correspondent who was also editor-in-chief of Czech Radio External Services.  In 2008, he published another radio-related book, Battle of the Airwaves: Radio and the 1938 Munich Crisis.

He has lived in Prague since 1991, and this book was originally written as a radio play and then made into a  book, Slyšte můj hlas. In 2015, this novel won the Czech Book Readers Prize.

Jantar is a small publishing house specialising in translated works. The book under review here was published to coincide with the 80th anniversary of the Munich Agreement of September 1938.

The central character of the novel is a nameless young man who was born in London in 1918, to German and Czech parents. He is fluent in Czech, German and English. This equips him well for a job in Prague, where he works as a translator for various foreign correspondents. He tunes into a number of radio stations, including the Reichssender Berlin and the Voice of America. Here, he hears the news of the deteriorating European situation brought about by the rise of National Socialism.

The status quo in Czechoslovakia is further inflamed with the rise of the Sudeten German Party which claims to represent all Germans in Czechoslovakia. Sudetenland was the name given to the German-speaking areas of North, South and Western Czechoslovakia. The Sudeten German Party wants to ‘nazify’ those German areas. Our protagonist goes off to the border areas with a British journalist to report on the situation. He listens to a new radio station, Radio Pravda Vitezi, which is broadcast to Czechs living in Austria and contains much anti-Jewish propaganda.

Our correspondent visits Carlsbad (now Karlovy Vary) in the Sudetenland.  Here, he learns that Hitler is going to address the Sudeten Germans on the radio, to promise them that they will not be repressed by the Czechs. He finds that, in a brutal expression of German nationalism, local Czech and Jewish shops have been vandalised. Our hero then lands a big job by going to Berlin and Berchtesgaden to cover Chamberlain’s appeasement meeting with Hitler. He meets a Father Reichenberger who appeals to him on behalf of many peace-loving Sudeten Germans, who do not wish to be part of a larger Nazi Germany.

All is in vain, however, and the Sudetenland is ceded to Germany on 1 October 1938. In Czechoslovakia, General Jan Syrový replaces the more moderate Edvard Beneš who resigns five days after the Munich Agreement had been signed; he goes into exile in London for the duration of WW2.

On 15 March 1939 Germany invaded Czechoslovakia and remained in control of the country until its liberation in 1945. The novel’s central character leaves Prague in late 1938 and returns to London, where he ends up working for the BBC Monitoring Service.

The book is an interesting text on this crucial period of European history, prior to the outbreak of the Second World War. I feel that it would work very well as a radio play – with the sounds of foreign short wave stations providing an interesting soundscape to the author’s narrative. The author cleverly weaves contemporary radio broadcasts into his own account of events. This book makes readers want to read up more on the events that led to the outbreak of the Second World War. The novel has a helpful appendix, containing biographical details of over the 40 politicians, journalists and broadcasters mentioned.

A film version of this book is under development.