Book Review: How to be Right...In a World Gone Wrong

Taking on Hate, Delusion and Prejudice on Talk Radio 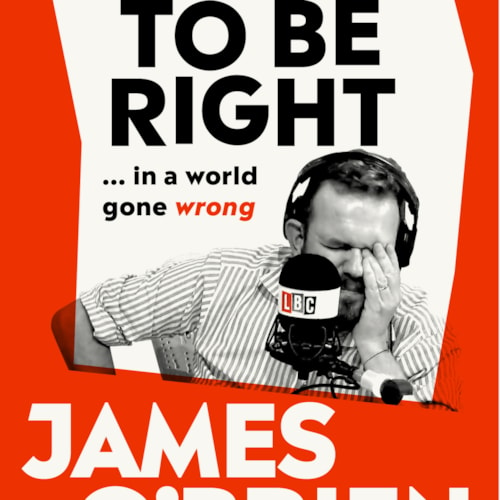 David Harris evaluates a book that holds up a mirror to contemporary, rising, levels of hate and prejudice in British society, by an author who encounters extremist views in his everyday talk radio work.

This is a ‘state-of-the-nation’ book, which holds up a mirror to contemporary British society. What is reflected back is a disturbing picture of racism, Islamophobia, homophobia, misogyny, prejudice and ignorance.

The man holding up the mirror is radio talk show host, James O’Brien (b. 1972) who, for the last 14 years, has hosted phone-in programmes on LBC.

The station broadcasts on 97.3MHz FM in the London area, and on DAB to most of the UK.
James is a person of liberal views, who – on a daily basis – confronts callers, many of whom have offensive opinions. He sees his role as to try to understand why people hold extreme views and to defuse some of the – often irrational – viewpoints put to him

He suggests that certain parts of the tabloid press are responsible for the scaremongering that stokes up such hatred, particularly amongst the ignorant. He also suggests that some people actually enjoy being frightened and need some minority group to vent their prejudice against. He likens this to the fact that “it has always been easier and more lucrative to sell tickets for the ghost train than for the speak-your-weight machine”. Each chapter of the book addresses a particular form of prejudice, and the author uses transcripts from phone-ins to demonstrate the irrational, poorly thought-out, views of many of his callers.

He begins with Islam, which, since ‘9/11’, has become the main target of prejudice in the UK. Many callers see all Muslims as somehow being complicit in Islamic-inspired terrorism. This situation, along with most other bias, is inflamed through the media and the unregulated internet. O’Brien suggests that people have lost the desire to question what they are being told. Anyone can post untruths on the internet and create a ‘following’, which further fans the fires of hatred.

The defining issue of today in the UK is ‘Brexit’: For the last two years, this has been a big topic on his radio show. O’Brien continually questions pro-Brexit callers about what it was that they thought they were voting for, and which aspects of the EU they wanted the UK to abandon. He suggests that racism was behind the motivation of many Brexit voters whose hatred is directed at people of Asian origin, and not just those who are EU co-citizens. He makes the very valid point that, over the last few decades, there has always been a ‘hate group’ in the UK. At one stage, these were, for instance, single parents, welfare benefit claimants and gays.

One could extend this argument back into the twentieth century when Jews, Irish and black people all were victims of prejudice and hatred. He then moves on to the subject of lesbians, gays, bisexuals and transgender people (LGBT). The author reports that many callers see homosexuality as a lifestyle-choice, and that some cite Biblical references to reinforce their moral positions.

Another chapter is devoted to what O’Brien calls ‘political correctness’ – a concept, which is largely undefinable, yet exists in the minds of his numerous bigoted callers. He attempts to get callers to define what they mean; however, in each case, no one can come up with a rational explanation about what they oppose.

The author then examine feminism, looking at the fact that women continue to be victims of sexual harassment, of both a physical and a verbal nature. Many callers seem to think that some women are not bothered by this sort of behaviour, which was once common but is now less frequent, but just as offensive.

Perhaps the most thought-provoking chapter is devoted to ‘nanny states’ and ‘classical liberals.’

Here, the author cites the growing problems caused by free-market policies, as opposed to state intervention. According to the argument here, fixed-odds betting terminals and sugar tax are two examples where the state has had to rein back an unfettered market, for the sake of the health and welfare of citizens.

O’Brien also looks at the age gap in society and examines how ‘Millennials’ (those born between 1981 and 2000) will struggle to buy a house or achieve the level of prosperity achieved by their parents. Partly, this is due to the rise of the ‘gig-economy’ in which many people have a rather dubious ‘self-employed’ status, which gives them no employment rights and no minimum wage. It is also owing to the fact that the ratio of average house prices to average wages has doubled within a generation. This fact seems not to have been grasped by many callers who see young people as ‘self-obsessed snowflakes’, who spend their money on smartphones.

In the final chapter, O’Brien examines what is, arguably, the most controversial figure of the Twenty-First Century: US President Donald Trump. The way in which any critical statement about him can be dismissed as ‘fake news’ leads the author to suggest that “the liars have the loudest voices”.

This book is highly recommended to anyone with an interest in talk radio, contemporary politics, and to those learning how to reason with the prejudiced – something we all need to do.