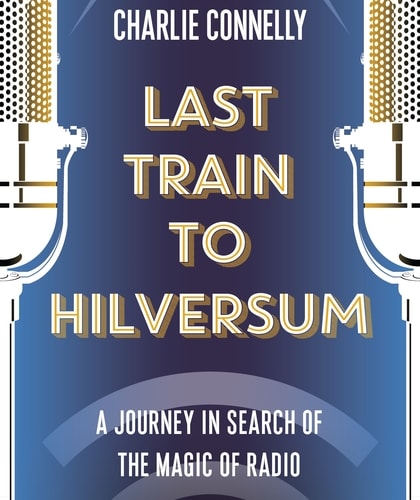 Buy your copy of "Last Train To Hilversum" here.

The title of the book derives from the author’s early memories of British AM radios, which featured on their dials many European place names such as Athlone, Kalundborg, Vienna and Hilversum. The title is divided into 27 short chapters, each of which explores a particular area of radio.

This is a general-interest book about radio written by Charlie Connelly (b. 1970) who also authored Attention All Shipping: a Journey Around the Shipping Forecast. He has also written several books on football, cricket, Ireland, walking, weather and the East End. In addition, he has broadcast in the UK and Ireland and written for national newspapers. His books are in the style of gentle humour and observation, popularised by such authors as Bill Bryson and Stuart Maconie.

I did not feel that the book started well, as the first chapter is a rather uncritical account of the supposed inevitability of FM and AM being switched off in favour of the allegedly superior DAB. Any writer with a serious interest in radio would, in my view, have come up with, at least, some arguments to retain FM.

The book then offers various chapters looking at the history of radio, interviews with radio presenters, sports broadcasting and some visits to historic radio locations.

At times, the volume reads as if it is a collection of previously published articles. However, this does not seem to be, in which case I felt the book could have benefited from having a clearer structure. The author could have put all the historical chapters together, and then added interviews and other articles.

Alternatively, he could have adopted a geographical theme and wrote about different parts of the UK and how they featured in the development of radio.

Despite my reservations about the book’s structure, it does have interesting content. The chapter on the Electrophone, an early re-diffusion (wired) service – which was pioneered in France in 1880, came to Britain in 1895 and ran until it was usurped by radio in 1925 – was original.

The book contains brief accounts of such topics as Marconi’s early experiments, Dame Nellie Melba’s 1920 broadcast from Chelmsford, Lord Reith, women at the BBC, Radio Fecamp (a pre-war commercial station) and The Goons. The chapter on SOS messages brought back memories to me. This service was started by the BBC back in 1923 and continued until the late 1990s.

The chapter on Two Lochs Radio, which broadcasts to the Wester Ross area of Northern Scotland and claims to be Britain’s smallest commercial station demonstrated how a geographical approach to the book might have been a good idea.

The book also throws in some interviews with radio presenters including Cerys Matthews, Dotun Adebayo, Charlotte Green and Corrie Corfield.

Connelly is primarily a sports writer, and the chapters on Saturday afternoon classified football results, early sports reporter Capt. Teddy Wakelam and football correspondent Peter Jones are written with a genuine enthusiasm, which is, arguably, absent in the rest of the book.

Connelly does talk about his youth. He enjoyed tuning around Medium Wave, trying to find new stations. The chapter on 1980s offshore station Laser 558 was very entertaining. The author managed to interview Jessie Brandon, one of Laser’s female presenters, who returned to the USA after the station closed.

The chapter I enjoyed the most was Radio Lessons in Hilversum. It is about the author’s visit to the Dutch radio HQ, to the east of Amsterdam. Connelly covers the history of Dutch radio in some depth where the first broadcasts began in 1919.

Many older RadioUser readers may also remember the Happy Station broadcasts from Radio Nederland, which were presented by Eddie Startz, from 1928 to 1969.

Buy your copy of "Last Train To Hilversum"

Sometimes we may include links to online retailers, from which we might receive a commission if you make a purchase. Affiliate links do not influence editorial coverage and will only be used when covering relevant products.