Book Review: SIGINT - The Secret History of Signals Intelligence in the World Wars.

A new title on signals intelligence in the two World Wars. 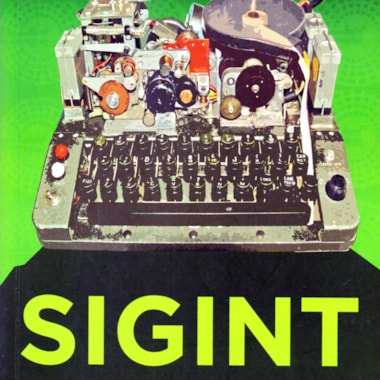 Buy your copy of "SIGINT" here.

SIGINT stands for ‘Signals Intelligence’; this is a professional specialisation that deals with the interception, monitoring and decoding of military radio signals.

The author of this book is a former British Army Intelligence Officer who served in Germany after the Second World War. Therefore, he can draw upon primary material obtained from German Intelligence officers.

The German counter-intelligence department (Abwehr) believed that they had won the ‘signals war’, and that the Enigma codes, which enabled secure military communications, were unbreakable.

However, it was not until 1976 that the first book about the role of the Bletchley Park codebreakers was published. Since then, there have been many more books, films, and TV programmes about the exploits of Alan Turing, his colleagues, and the role of the early computer prototypes in codebreaking.

Modern SIGINT began with the First World War when Britain cut German telegraph cables in the North Sea. The importance of German military radio communications was quickly realised, and monitoring stations were established in the UK.

In a historical overview, the author provides a useful chapter on codes and how they have been used by armies – and by what we would now call intelligence services – since ancient times. He also manages to explain, in non-technical terms, the basic principles of coding and decoding messages.

An important application of SIGINT analysis was direction-finding. By homing in on the location of important military signals, some clues could be obtained about such things as the order of battle of the enemy.

Much of the First World War was fought in trenches, where field telephones were the main form of communications. Radio did play an important part in the German defeat of the Russians at the Battle of Tannenberg in 1914.  German operators were able to learn about Russian troop deployments because the Russians sent radio signals in plain language. And, in general, luck seems to have played an important part in many SIGINT endeavours, as well as technological innovation.

The author manages to cleverly weave a general introduction to both the First and Second World Wars into his account. This makes the book extremely readable, as one does not have to look up references.

There is an interesting chapter about the sinking of the Lusitania in 1917 by the German submarine U20. Here, the author raises the issue of whether or not this could have been avoided because the Admiralty knew the position of the submarine.

Perhaps the ‘ultimate’ SIGINT success was the decoding of the so-called Zimmerman Telegram, in which Germany offered an alliance to Mexico. The actions around this decrypt were instrumental in bringing the USA into the First World War in 1917.

The Second World War takes up the second half of the book and the author comprehensively covers the main theatres of the war and the ways in which SIGINT was used throughout.

This book – unlike many others – does not focus exclusively on ENIGMA and other coding machines. Nevertheless, we do learn that 100,000 ENIGMA machines were manufactured but only 30 Lorenz SZ40, which were used by German High Command.

The author makes a very important point about SIGINT, in that information is only useful if it can be acted upon. He demonstrates this by stating that, in the Second World War, Germans were able to track British bombers, as they flew on missions to destroy German cities; however, the German army lacked sufficient fighters and anti-aircraft guns to shoot the bombers down.

SIGINT is thus not just about radio signals; the author includes the British development of 10cm radar, which was used to detect U boats. The Germans were able to break codes used by the Americans, as was illustrated in the case of Col. Fellers. whose reports to the USA on British troop movements in North Africa were intercepted.

The title also briefly covers Russian and Japanese codes and codebreaking. Of particular interest was the Russian Rote Drei (‘Red-Three’) network of agents based in neutral Switzerland. It received intelligence about Germany, which was sent back to the USSR; some of this information was, in fact, sent via Bletchley Park.

The book concludes with a lengthy and useful appendix; this is largely an account of German SIGINT during World War Two, authored by Wilhelm F. Flicke , a German Intelligence office befriended by the author after the end of the war.

Overall, this is an enjoyable and highly informative book, which should be of interest to anyone who likes to read about the First and Second World Wars, as well as those whose main interests lie in signals and codes.

Buy your copy of "SIGINT" here

This article was featured in the September 2019 issue of RadioUser. Buy your copy of the magazine here.