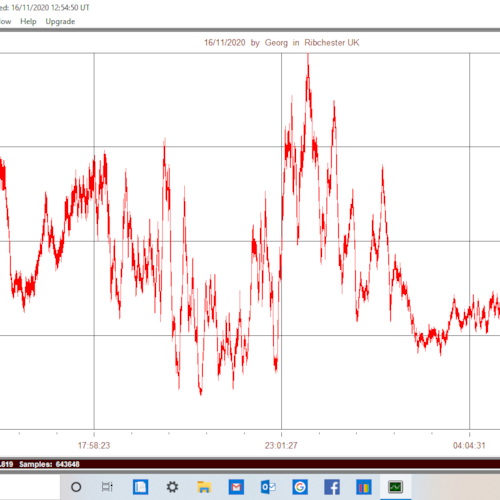 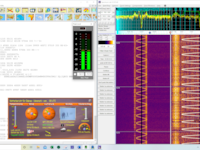 This is the first in a new series of posts called From the Editor's Shack, in which I am hoping to share ideas, images and screenshots I have been able to capture here in the week before, and which relate to the various aspects of the radio hobby.

This week, I finally got around to finishing my VLF solar observatory. With the help of Andrew Thomas, of the UK Radio Astronomy Association (UKRAA), I set up my post, consisting of the UKRAA Loop Aerial with ATU, UKRAA VLF Receiver, a LabJack U3-HV (all available in the UKRAA Shop) and my PC. The first image is a trace, made with Radio Sky Pipe, of the overnight changes in the signal of the German Navy transmitter at Rhauderfehn on 23.4kHz, including the station's daily 'downtime', early in the morning. Fascinating to see the oscillations of the signal, in dependence on the Sun's impact on our Ionosphere (and other things, of course).

The second screenshot represents RTTY reception of synoptic weather data from The German Weather Service (DWD, Deutscher Wetter dienst) in Hamburg. The signal on the frequency of 7545.1kHz was received on my AOR AR7030 HF radio, set aside for the reception of utility data. It was then fed, via soundcard, into my PC, where I used Zorns Lemma 11.42 and Spectrum Lab to decode it. I played around with Spectrum Lab a little, until I found the 'chain-test' function, which produced this great image of the RTTY signal. The smaller image shows the data from a Danish weather station, translated into pictorial form, so you can see what is happening.