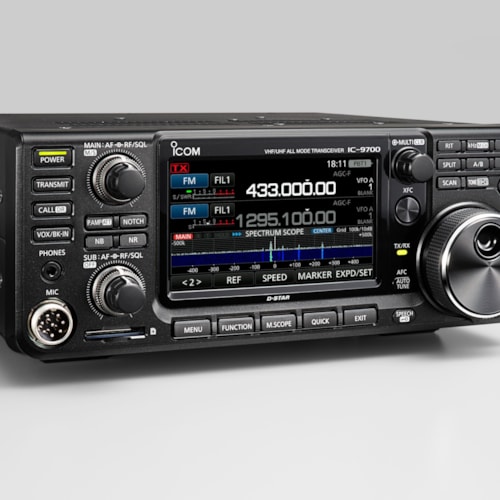 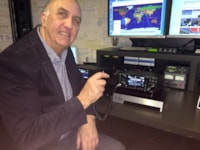 The various mainstream Japanese amateur radio manufacturers seem to have got into the habit of trailing new equipment well before launch and the Icom IC-9700 is no exception. Its arrival has been heralded for some time and I gather that eager buyers were putting down holding deposits up to a year ago!

There is probably good reason for the long list of would-be buyers. The IC-9700 has several unique aspects that render it of particular interest as I will set out below. So, it was with some enthusiasm that I accepted an invitation to the formal launch by Icom UK, held in mid-January at the RSGB’s National Radio Centre at Bletchley Park. I wasn’t the only one – the event was well attended by members of the amateur radio press and all the major retailers, keen to see this new arrival in the flesh.

Major Features
I would suggest there are two ground-breaking aspects to the IC-9700. One is that the 23cm band comes as standard. In the past it has tended to be an added extra, usually for an additional cost of something like £500. The inclusion of the 4m band in the popular IC-7300 has certainly encouraged activity on that band and the inclusion of the 23cm band on the IC-9700 may well do the same for that band, which would be great because it’s an interesting and rewarding band to operate.

The second aspect is that, again like it’s brother the IC-7300, the IC-9700 comes in at an attractive price. Sub-£2,000 (a guide price of around £1800 at the time of writing) is significant for a transceiver that covers the 2m, 70cm and 23cm bands with the sort of performance that Icom are claiming. It’s no wonder that there have been hundreds of pre-orders in the UK alone.

What else? Well, the IC-9700 looks and feels like the IC-7300 so not only will the two look good together in your shack but most of the operations are similar. I own an IC-7300 and felt immediately familiar with the operation and menu system of the IC-9700. Incidentally, the size and appearance pretty much matches Icom’s broadband, multimode IC-R8600 receiver too.

I should also mention that the IC-9700 includes D-STAR digital voice as an operating mode. D-STAR has been around for a number of years now but I do wonder whether having it available in a significant base station transceiver, as against handhelds, will give the mode a boost, particularly for direct (rather than repeater) QSOs. Time will tell.

The Detail
Let’s look in more detail at the specification. Just to recap, this transceiver covers the 2m, 70cm and 23cm bands. Power levels are 100/75/10W respectively. The radio uses the latest high-speed SDR technology with direct sampling on both 2m and 70cm, echoing the underlying technology of the IC-7300 and IC-7610. There is a touchscreen with waterfall and spectrum display, very handy on the, often sparsely populated, VHF, UHF and 23cm bands – you can see at a glance when a signal pops up. Modes include SSB, CW, AM, FM, RTTY, DV (D-STAR) and DD (digital data – see below).

Satellite operation is catered for with dual-watch and duplex facilities, plus normal and reverse tracking (to take account of Doppler shift). There is a 128kpbs digital data facility on the 23cm band, which could be useful for setting up high-speed data links. Looking at the pre-release brochure, it would appear that control of external linear amplifiers is via the multi-pin accessory socket but a handy feature is that maximum power levels can be set for each band, which can help to avoid overdriving external amplifiers.

Interfaces include USB and the usual Icom C-IV (as with the IC-7300, etc) but also a LAN port – remote operation can be achieved without a PC connected directly to the transceiver. A 10MHz reference signal input allows very accurate frequency control, important for some low-signal data modes.

There’s plenty more, which you can see on the Icom UK website.

The $64,000 question is, of course, when will the IC-9700 be available and this is the one question Icom UK were unable to answer at the launch. Hopefully there won’t be too much longer to wait and PW will hope to bring a full user review at the earliest opportunity. (I have a reviewer waiting in the wings with an IC-9700 on order!)

Review taken from the March issue of Practical Wireless, available to purchase here