David Harris reviews a new title on the development of Radio Caroline, focusing on the business case behind the station, on some of its backers and supporters, and on how it pioneered new music genres and formats. 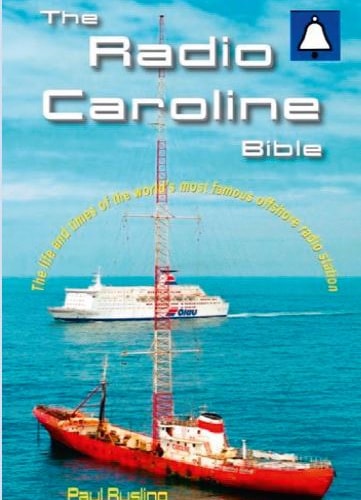 Paul Rusling has set himself the task of writing the ‘definitive’ book about Radio Caroline. He has succeeded admirably with this superb history. Rusling is also the author of Radio Adventures of the MV Communicator (Radio User, Jan 2017, 36-37) and of Laser Radio Programming (Radio User, June 2017, 54-55).

This new title begins with a summary of some pre-Caroline offshore Scandinavian stations, such as Radio Nord and Radio Mercur. The book really kicks off with the arrival in London of Irish businessman Ronan O’Rahilly (b.1940) the key figure behind Radio Caroline. The early 1960s saw an explosion in pop music, led by The Beatles; reasonably priced portable transistor radios became available and young people wanted to hear new music. O’Rahilly saw a business opportunity and began to cultivate establishment contacts to fund an offshore radio station. The BBC, by contrast, had largely ignored the needs of youngsters; it was not until 1967 that Radio One was launched. The motivation of Ronan was to make money, to go against the establishment, and to offer much more musical diversity.

Rusling’s book is different from many other Caroline books, in that it explores the business backing behind offshore radio and avoids fanciful stories. Instead, the author is interested in the “authenticated aspects of the story of Caroline”. One of the early backers was Pye Radio (later part of Phillips); Pye wanted to increase sales of their portable radios and saw offshore radio as a way of creating demand. In this context, Rusling explores the secretive ways in which companies in the tax havens of Liechtenstein and Panama were used to purchase and register the ships used for the stations.

Radio Caroline started broadcasting at Easter 1964 from the MV Caroline and was closely followed by Radio Atlanta on the MV Mi Amigo. The stations merged after a few months, with MV Caroline moving to Isle of Man waters as Caroline North, while MV Mi Amigo remained in the Thames Estuary as Caroline South.

Both stations were profitable, with advertising bringing in £50,000 (around £700,000 in today money) a month by the end of 1964. Rusling provides some background to other offshore stations of the time, with the US-backed Radio London emerging as the main contender. However, in 1966, Caroline had a respectable audience of nine million listeners. Philip Solomon, an Irish music promoter, became a backer, as he wanted to use the station to promote artists on his own Major Minor label.

However, the Marine Offences Act of 1967 brought an end to offshore stations, apart from Radio Caroline North and South; these remained on the air until March 1968. Dutch marine services company, Wijsmullers seized both vessels and towed them to Amsterdam, as they were owed unpaid fees. The vessels languished in the Netherlands until 1972, when MV Caroline was sold for scrap.

MV Mi Amigo was subsequently sold to the Dutch Free Radio Campaign. The next part of this book covers some troubled years – from the resumption of Radio Caroline in 1972 until the sinking of the MV Mi Amigo in 1980. Rusling explores the variety of other (mainly Dutch and Flemish) stations that Caroline hosted, as well as discussing the involvement of George Harrison and John Lennon in giving financial support to Caroline. In 1983, Ronan O’Rahilly and Vincent Monsey bought the trawler MV Ross Revenge, which was fi tted out as a radio ship. It broadcast as Radio Caroline (on and off) until 1990. In 1991, the Ross Revenge was towed to Dover where it was bought by Peter Moore for £20,000.

Rusling details Caroline’s long struggle back to the airwaves via various RSL stations, satellite platforms and the internet. The story is brought up to date, with an account of how Caroline obtained a licence to broadcast on 648 kHz AM in 2017, and how it is now on a number of DAB outlets across the UK.

Rusling adds a lot to previous accounts of the Caroline story by giving technical information about frequencies, transmitters and aerials. He offers a much more balanced account of Caroline than any other book I have read on this subject. I highly recommend this book.

This review featured in the December 2019 issue of RadioUser