Tim Kirby GW4VXE adds one more DMR rig to his portfolio of reviews – this one is a mobile with Bluetooth and other neat features. 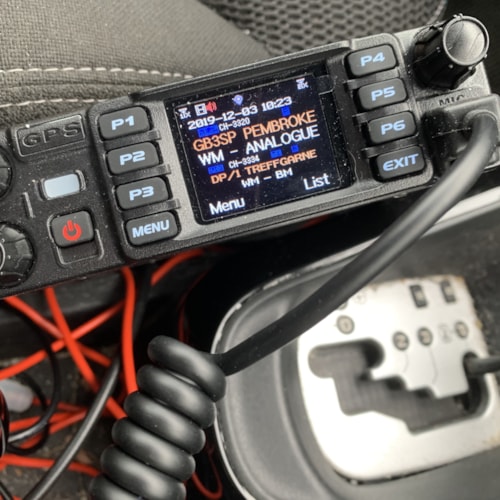 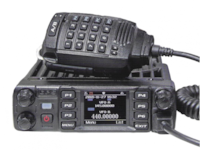 I’ve enjoyed watching the evolution of DMR radios into amateur use over the last few years and it’s been great to share impressions of many of these radios through the pages of PW. Most of the radios that we’ve looked at have been handhelds. I don’t think there’s been one that I couldn’t make work or do what I wanted to do but it’s fair to say that some have been more quirky than others. Anytone, though, seems to have hit the right spot with their AT-868 and AT-878 handheld models which, as the saying goes, do what it says on the tin.

When Anytone announced that they would be releasing a dual-band mobile transceiver for DMR/Analogue it’s fair to say that it was eagerly anticipated! As ever, it seemed to take a while to come to market, but I was very excited when Chris Taylor at Moonraker contacted me to say that the radios had arrived and there was one with my name on it.

The radio arrived just before we moved from Oxfordshire to Pembrokeshire, meaning that there was only a short time to get some first impressions of the rig. First though, what are do the manufacturers say about the rig? I have summarised the specification and features in the sidebar, from the Moonraker website.

On Arrival
As the rig arrived, supplied by Moonraker, it came with their comprehensive UK codeplug. This contains all current digital and analogue repeaters and simplex channels. If you supply Moonraker with your DMR radio ID at the time of purchase, this can be programmed up for you before the radio leaves the shop so you can just switch on and use the rig when it arrives. I have seen some comments online that a few people find the codeplug too comprehensive and confusing. You can’t win! Although there is an awful lot in there, you will probably quickly find what you need to use and stick with that. However, if you do venture to another area, you can follow the same structure and will hopefully find the channels you need within the appropriate ‘Zone’.

The rig arrived already programmed for me, so all I had to do was to plug it into 12V and in the first instance, I connected my V-2000 antenna on the roof and switched to the GB7TC 70cm DMR repeater at Swindon.

A somewhat confusing 24 hours was started by my first contact. Tim M0KEP at Abingdon reported that everything sounded good, whereas Ian G8NXJ said that my audio was intermittent. Even more puzzling, it sounded fine to me on a monitor receiver. But Ian played my audio back to me – he definitely wasn’t making it up! Chris 2E0UCW came to the rescue a day or so later with the reason. Ian was using a Motorola rig and it seems that they don’t like the Talker Alias data that the Anytone (and other manufacturer’s) rigs, designed for the amateur market, send. The Motorola doesn’t understand what it is receiving, throws away the data, resynchronises and then when the next Talker Alias transmission takes place, it all happens again. During the review period, the only person who reported this was Ian. Nevertheless, if your regular circle of DMR contacts includes people who use Motorola rigs and report this problem, you can easily go into the codeplug and turn off the transmission of the Talker Alias data.

I’d also had the chance to try the rig on analogue, using the GB3TD (Swindon 70cm), GB3WH (Swindon 2m) and GB3RD (Reading 2m) repeaters – all of which were pre-programmed in the codeplug, where the audio was reported as sounding good, and representative of how I normally sound.

In the Car
With these tests done, I wanted to pop the rig into the car and see how I got on with it. It was really good being able to put one side of the radio on an analogue repeater and the other side on a DMR repeater. Each side of the radio has an independent volume control meaning that it’s easy to choose which you listen to if they both fire up at once. You can change which side of the rig you are transmitting on with a button on the microphone (or the rig, but you wouldn’t want to do that when mobile).

Better still, if you have a Bluetooth-enabled audio system in your car, you can pair your AT-D578UVPRO to it. This means that you can use the hands-free capability of your car’s audio system as a microphone and also as an extension speaker. The AT-D578UVPRO also comes with a Bluetooth-enabled PTT, which you can attach to, perhaps, the gear stick, with the supplied Velcro strap. Early versions of the firmware meant that you had to keep pressing the PTT to transmit but a later release changed that so that you can press once to start transmitting and again to stop transmitting. Much better and safer. My car didn’t have full Bluetooth capability, so I had to test this on a friend’s vehicle, which paired with the rig without difficulty and we experienced no problems. I was able to pair with a Bluetooth headset though, which combined with the supplied Bluetooth PTT, might provide a safe option for mobile operating if, like me, your car is not as technically advanced as your radio!

Capabilities
If you’ve used the Anytone DMR handhelds, you will find the capabilities of the AT-D578UVPRO very familiar. There’s Digital Monitor, allowing you to monitor all the talkgroups on a repeater without having them programmed into your codeplug. You can change talkgroup from the keypad of the microphone, which is really useful and saves having to change channel on a repeater to change talkgroups (although that would probably be easier and safer if you are mobile).
The Customer Programming Software is familiar too, if you have used the Anytone DMR handhelds. I had no problem getting the rig to talk to the computer via the supplied USB cable. Although this is straightforward, you may find that you don’t have to use the computer and CPS very often (good news if the rig is in the car) because you can change many parameters of a channel through the Settings/Channel Set from the front panel of the radio. This is handy if your local repeater changes frequency (which GB3TD did during the review period).
The AT-D578UVPRO is advertised as having APRS capability. Which it does. However, I’d point out that it’s a bit of a limited implementation. The rig will transmit both analogue and digital APRS, which is great. With the inbuilt GPS, it can send your position as you key up or key down. It doesn’t have a smart beacon to transmit a position beacon every five minutes (say), or every km or unit of distance. I feel that would be an improvement. The main disappointment though, was that the rig doesn’t decode received APRS data. Obviously, in a mobile situation, you shouldn’t be peering at the screen to see what APRS data you’ve received but it would be nice to do so if you are using the rig at home, or even at the end of the journey in the car to page back and see who you heard. Maybe later versions of the firmware will improve on the APRS implementation if enough of us ask about it.
What the AT-D578UVPRO does have is crossband repeater functionality built into it: crossband analogue-to-analogue (can be UHF-VHF or VHF-UHF), crossband analogue-to-digital (can be UHF-VHF or VHF-UHF) and crossband digital (UHF to VHF or VHF-UHF on different time slots). There all sorts of possibilities here for playing around and perhaps some more serious applications for emergency communications. If you’re interested in seeing this, there are some good YouTube videos, which show the functionality in operation.
The supplied microphone is actually a speaker/microphone, so you can configure the rig to output audio through the microphone as well as the internal speaker. You might like this. I didn’t, but it could have some possibilities.
Out mobile, I found the 50W power level very useful, especially on DMR, which can be less forgiving than analogue with respect to mobile flutter and dropouts. I had some great contacts through the GB7CC (Cheltenham 70cm DMR) repeater as I was 30 miles or so away from the repeater, with very few dropouts being reported. If you’re closer to the repeater or station you’re working, you can reduce the power to either 25 or 10W – sensible power levels. From home, it might be nice to have 5W or 1W levels too, which would make the rig even more flexible.

Codeplug and Firmware Updates
Moonraker currently maintain the codeplugs for the AT-D578UVPRO (along with the Anytone handhelds) and you can download updated versions of the codeplug from the their website and upload them to your radio (remember to change the Radio ID before you upload to the radio), which means that your radio is kept abreast of any new repeaters or channel changes that take place.
Also, Anytone maintain the firmware for the rig and have released a couple of versions so far, mostly fixing minor bugs, but it’s possible that new features could be implemented this way too. Firmware update is pretty straightforward, requiring you to download the files onto your computer and upload them to the radio via your USB connection. There are YouTube videos showing how to do this and Anytone, unlike some other manufacturers, include adequate instructions with the firmware release on how to apply the upgrade.

Did it live up to Expectations?
I think it did! Some people have reported some glitches (none of them showstoppers) online, but in my usage for the review, other than the Talker Alias issue that I mentioned earlier, everything worked as I thought it should. The Bluetooth implementation will be a real winner if you want to operate mobile and have a Bluetooth-equipped audio system in your car and even if you don’t have such a system, a Bluetooth headset and the supplied Bluetooth PTT will work very well.

The rig works well on both analogue (FM) and DMR and would be suitable for use in either base station or mobile scenarios assuming you have DMR repeaters and activity around you (which most areas do).

I enjoyed the AT-D578UVPRO and was quite sorry to return the rig to Chris after the review. If you’re after a dual-band FM/DMR rig, then it’s well worthy of your consideration. If you already own one of the Anytone DMR handhelds, then the similarity in operation between the mobile and the handhelds may well be attractive.

Many thanks to Chris Taylor at Moonraker for the loan of the rig and to Chris Waters 2E0UCW for his help in unravelling the ‘Talker Alias’ issue. The Anytone AT-D578UVPRO costs £349.99 and is available from Moonraker Ltd as well as other suppliers.

Further details, including the full range of suitable accessories, can be found on the Moonraker website at the following URL:
https://tinyurl.com/vjy5z7t

This review was featured in the March 2020 issue of Practical Wireless. Purchase your copy here!