Tim Kirby G4VXE reviews a 2m antenna that is a little out of the ordinary! Sometimes, things just grab your attention! Scrolling through Twitter one day, I spotted some tweets from Air Antennas (@AntennaAir) about an inflatable antenna for the 2m band. I was intrigued and decided to find out more.

The man behind the antenna is Tom Morris GM3HHN, Fig. 1, who has been professionally involved in the design and sale of antennas for many years, mostly for the 2G, 3G, 4G and now 5G markets. Tom writes, “I came up with the inflatable Ham antenna, about four years ago. As a QRP and SOTA fan, I wanted a suitable antenna that could work as a base, portable etc, but be able to carry it in a rucksack, with very little effort!” What does Tom say about the antenna? “A professionally made, robust, fully portable and waterproof infl atable antenna, for the amateur bands. A 144-148MHz version, Perfect for Base, SOTA, Emergency Comms and just good old backpacking fun! Hang it from a tree, a pole, or fix it to a fence etc, supplied with an overhang flap at the top, as well as eyelets to string it up anywhere!"

The antenna arrived, well-packaged in a neat pouch with the antenna folded up inside, Fig. 2. To put in a rucksack or in the boot of the car, it’s perfect because the pouch is really compact as well as being a bit squashy, which always helps with the packing process. The pouch is secured by a strong Velcro strip. The antenna is terminated in a PL-259 connector connected to the antenna by RG-174 coax.

The RG-174 enters the bottom of the inflatable antenna, which is, of course, sealed. So, in the unlikely event that there was a problem with the coax, I am not sure how easy it would be to re-terminate the antenna. The inflatable sleeve containing the antenna unfurls to a length of around 5ft.

How did it work on the air? Well, I inflated the antenna, Fig. 3, and propped it up in the maple tree in our garden at a height The Ham Air 2m Half-Wave Vertical Inflatable Antenna of around 15ft above the ground. The Swindon GB3WH and Reading GB3RD repeaters were absolutely end-stop over a distance of 15 to 20 miles, whereas there is some noise on a handheld and rubber duck antenna on receive. I was pleased to find that I could get into both repeaters with a watt or two. Hugh G4JTO confirmed that I was a fully quieting signal on GB3WH and I had a quick contact with Jonathan M0JSX on GB3RD. Jonathan was having problems receiving me but after some investigation, that proved to be an issue between GB3RD and Jonathan.

Next day, I wanted to try the antenna a little higher in the air, so I screwed a cup hook into some wood below the eaves of the house, just outside an upstairs window and suspended the antenna from that, Fig. 4. With 1W I was pleased to fi nd that I could access the GB3NE repeater at Newbury, which is inaudible on a handheld and standard rubber duck antenna at ground level in the garden, so the antenna was providing plenty of gain. I felt the ability to deploy the antenna simply at a decent height was a real positive and something that would be very useful at a temporary location, for example. With the thin coax, it would be easy to get through a window frame, although make sure you don’t pinch or sever the cable.

As a portable antenna for hilltop operation, the antenna is simple to transport and deploy. You could hang it from a pole or if there is a convenient tree, hang it from a branch. You can also prop the antenna up against a wall or a fence, although because it is so light, you may need to try and secure it so that it does not blow over if there is anything above a light wind.

Reaction to the Air Antenna has been positive and most people seemed interested and intrigued by the concept. Some were interested in inflating the antenna with helium and having it self supported. I didn’t try that as part of the review, but gather from Tom Morris that it has been successfully tried and tested. One person I spoke to couldn’t see the point of having an inflatable antenna but I think the high-portability and easy deployment speaks for itself. 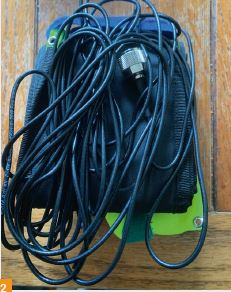 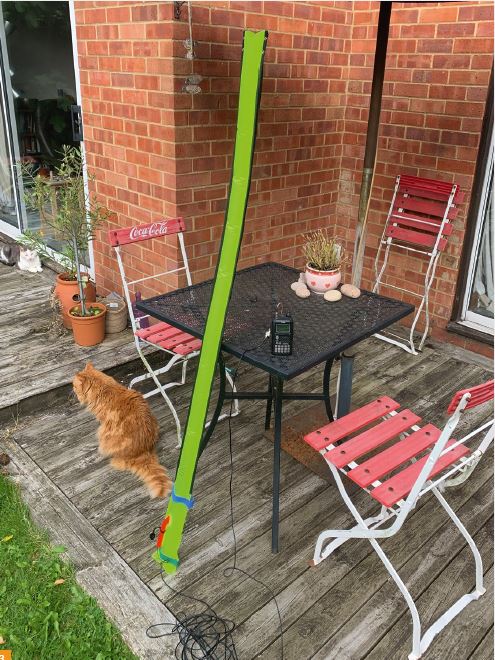 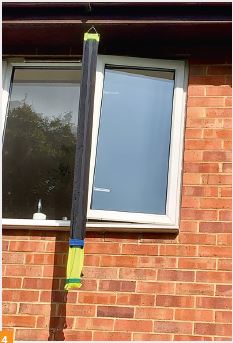 I found the antenna worked well and can see that it would work very well indeed as a SOTA antenna easy to transport in a rucksack and an efficient antenna once you get to the top of the hill. Part of me wished that it was a dual-band 2m/70cm model because it’s often nice to cover both bands when you’re portable. Speaking to Tom it sounded as though a dual-band model might be available in the future, with the design currently being tweaked. Tom also has other inflatable antennas in the offing; a 20m version that we hope to review here in PW, a UHF model for 70cm and PMR that will be only 4ft long as well as a version designed for the Military, covering 200-380MHz.

The 2m antenna costs £99. You can contact Tom Morris on Twitter @AntennaAir or e-mail him at [email protected] for more details or to make a purchase.