Daimon Tilley G4USI gets to play with the successor to the popular FT-817. 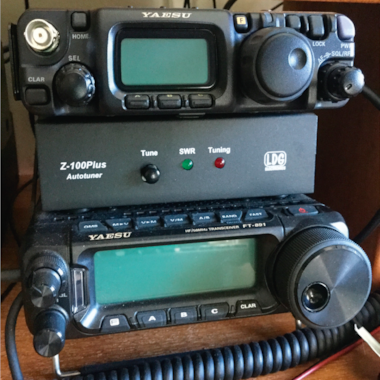 As regular readers will have spotted, I am something of a QRP enthusiast and my shack is now dominated by QRP rigs, with my Yaesu FT-891 feeling a bit like an exception rather than a rule. But until recently I had no experience of a commercial QRP transceiver, having always built my own from kits. However, I could hardly be unaware of the FT-817, introduced almost 20 years ago and revolutionary at the time, offering so much in such a small package. I know from QRP forums that there is a dedicated following of aficionados who just love this little rig and huge numbers were sold. Remarkably, this and its successors (FT-817ND and now the FT-818ND) remains the only commercial
QRP rig by the ‘big three’ that covers such a wide range of modes and frequency options. Those early designers must be patting themselves on the back. Yes, Icom have recently announced the launch of the IC-705, which may prove to be a serious contender, but is not expected in the UK until well into 2020.

The FT-818ND replaced the FT-817ND a few years ago but there was quite a bit of disappointment from enthusiasts at the time who felt that while Yaesu had made some upgrades, they had missed an opportunity and that the rig did not deserve the new ‘818’ designation.

All of which meant that I was suitably intrigued and delighted when Yaesu UK kindly loaned me an FT-818ND for this review. Does this rig still have what it takes for QRP operation, such as SOTA activations and the like?

On HF, the FT-818 goes from topband to 50MHz, with 2m and 70cm coverage too. On receive there is the addition of the FM Broadcast band and AM coverage of the Airband. Airband fans shouldn’t get excited though, as this coverage is in user-defi ned steps but the 8.33kHz step currently in use is not available for selection. The rig can put out 6W, reduced to just 2.5W when running on the supplied internal Ni-Mh battery pack.

So, what’s changed? Probably not enough to tempt you if you already have an FT-817ND but is it enough to give the rig a few more years of life? The power output is increased from 5W to 6W when running from an external supply. And when on battery power, the internal battery pack has been beefed up from 1400mAh to 1900mAh. The other notable change has been the inclusion of the TCXO-9 high stability oscillator. This improves frequency stability to a claimed ±0.5ppm, useful not only for satellite working, an aspect of the hobby that is increasingly popular, but also for the new digital modes such as FT8 and FT4.

It arrived well packaged, the Yaesu box nestling nicely inside a bigger and well cushioned one. On opening, the radio itself is accompanied by a number of accessories:

• A Ni-Mh battery pack (no charger is supplied, but charging is accomplished when connected to a 13.8V supply)

• A combination rubber-duck antenna in three parts to achieve use on 50, 144 and 430MHz

• A microphone with ‘up, down’ and ‘fast’ buttons for tuning remotely, the same as supplied with many Yaesu rigs, and identical to the one for my FT-891

As with many of the larger manufacturers, there are a number of optional extras available to purchase. These include:
• Collins SSB fi lter
• Collins CW fi lters (see later comments)
• A choice of microphones
• Lightweight stereo headphones
• USB interface
• A soft case
• CAT interface cable

Although this is a compact portable rig, it has many useful features found on its larger cousins. These include VOX, twin VFOs, noise blanker, AGC, IPO, CW keyer and 200 memories. CTCSS facilities are also provided for repeater operation.

The rig offers a number of external connection points for the usual features such as microphone, key, headphones/speakers as well as power, antenna and two ports using mini-DIN jacks for data and ACC. The data port is 6-pin and used for digital modes, with PTT functionality, and the 8-pin ACC port is used for connection to an external amplifier, transceiver-to-transceiver cloning and computer control.

Perhaps surprisingly, I had only seen pictures of this rig, and never encountered one up close. My first impressions were a little mixed. It is small and compact without doubt, but to my eyes it looked a little dated, reminding me very much of my old Trio TR- 2300 2m FM portable rig of the late 70s. The layout is of the conventional base-station or mobile type, with the fascia on the front narrow edge. While this is fine for home, mobile and pedestrian mobile use, it can be a little inconvenient on summits or other portable sites where no table is available.

Because the fascia is placed on the smallest surface, the buttons and screen are necessarily small and I found it difficult for my fingers to operate the buttons satisfactorily. Otherwise the controls felt well made, with the notable exception of the AF Gain, which in the case of the review radio had a disconcerting wobble to it, making it feel vulnerable.

On powering up, I found the LCD display to be difficult to view from all angles but adjustment of the contrast controls improved things significantly. It is possible to choose different background colours for the display, including blue, amber and violet. This backlighting can also be turned off to preserve battery life. Usefully, the display can give a graphical indication of SWR, modulation, ALC and power output, selected from within the menu structure, although, with the small display, only one of these can be shown at a time.

I particularly liked the tuning knob arrangements. Although the main tuning knob is too small to quickly scan the bands, it definitely has a quality feel to it and is beautifully smooth. I also very much liked the feature where I could use the small ‘SEL’ knob to tune in bigger increments, which helps in covering the bands quickly.

While tuning around for the first time, I heard Geoff GM8OFQ, from the Isle of Hoy. Geoff is very active and well sought after on the HF bands with a booming signal. We had spoken before a number of times and a quick answer to his call  brought me a 57 to 59 report running 5W on 40m SSB into my quarter-wave groundplane antenna.

A bit more tuning and one or two more SSB contacts went in the log although, of course, there were a number of stations who couldn’t copy me at QRP levels. So, to CW, which is my preferred mode for QRP operation. I didn’t know what to expect but while tuning around the 40m band in the evenings, I was surprised that there is no CW filter fitted as standard. In busy portions of the band I found it impossible to differentiate between stations, although I expect that someone more competent at CW than me might be able to do so.

After some internet searching, I discovered that there are optional Collins 300Hz or 500Hz CW filters available, which retail around the £130 to £140 mark. I am unable to comment on how this filter performs but if you are buying the rig for CW use, then I consider it an essential accessory. To be honest, I think it is disappointing that a rig designed by a major manufacturer for QRP use doesn’t have such a filter included as standard although I recognise not everyone will want or need this facility.

Sadly, this lack of filter really limited my evening operating activities but I did manage a good number of daytime CW QSOs when band conditions were much quieter.

Turning my attention to receive, I found shortwave broadcast reception to be good, and again I liked the use of the ‘SEL’ knob affording tuning in 5kHz increments, with the same knob providing 2.5kHz increments on SSB. These default increments can be adjusted from the menu.

One pleasant surprise was the level of audio output available, which is very high and should allow the rig to be used in quite noisy environments.

I used the rig portable in my garden, with my dedicated End Fed Half Wave (EFHW) antenna for 40m and 20m. The rig was matched with a SOTABEAMS EFHW tuner and a 17ft counterpoise. Power was now down to 2.5W on the internal Ni-MH battery, which is rated at 1900mAh. Performance was as expected, and contacts were made without issue.

On the positive side, the FT-818 is small and compact, fairly easy to use and covers a huge chunk of spectrum. It has some nice features, including the volume output and the use of the ‘SEL’ knob for greater tuning increments. Antennas can be connected to either the rear SO-239 or front BNC connectors. By default, the former is for 1.8 to 30MHz and the latter for higher frequencies but you can change this in the menu system.

On the negative side, I think it is starting to look a little long in the tooth, despite its revamp. I can understand why critics feel that Yaesu missed an opportunity to retain their dominance of the QRP market by making more radical changes to the design. But that takes time and investment and no doubt the FT-818ND continues to sell well. However, technology has moved on significantly since the launch of the FT-817. Using Ni-Mh batteries, for which power is reduced to make them last, when much better technologies are around, is one example. The lack of a CW filter is also a negative in my view, addressed in other Yaesu rigs such as my FT-891 with excellent digital signal processing. However, nowadays many operators prefer data modes such as FT4 and FT8 for weak-signal working and although I didn’t try these out, with the high-stability oscillator fitted as standard in the FT-818, they should work
well.

Yaesu had a niche with this rig, covering the range of modes and frequencies it does, but other existing and announced rigs now occupy much the same spot in the market so it would be great to see Yaesu responding with a truly modern successor, now that the launch of the FTdx101 is out of the way! Only time will tell.

In the meantime, until the Icom offering hits the shelves, the nearest rivals to the FT-818 are the Elecraft KX2 or KX3, which are much more expensive, or the slightly cheaper Xiegu X5105. While they all have their pros and cons, none can offer the same modes and frequency coverage in the one package.

It is remarkable that the FT-817/818 has had such a clear run with no obvious competition. The FT-818 will undoubtedly continue to appeal to those who want to be able to cover a wide range of bands and modes in a compact and affordable package. It depends on what sort of operating you do. In my case, I am content with my other QRP HF rigs because they offer what I need. But if I wanted, for example, to run SSB, CW or data on VHF as well as HF, maybe with some satellite operation, then the FT-818 would still be a worthy contender.

The FT-818 is available from the usual UK retailers for around £599 with a £45 cash back offer at the time of writing. My thanks to Yaesu for the loan of the rig.