What is 'Wireless Internationalism' 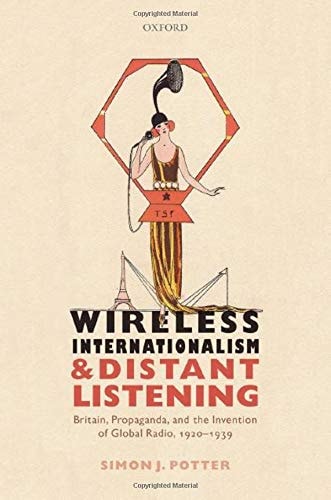 This is a substantial, and thoroughly-researched investigation of how Britain approached the world, and how the world was brought to Britain, through radio, in the interwar period and beyond. The author aims to unite the cultural, institutional and political facets of international broadcasting. He posits that international radio between the Two World Wars sought to create an imaginative emotional connection with listeners over vast distances and a sense of belonging.

More importantly, international broadcasting built a new transnational identity, to avoid narrow nationalism and its offspring, war. This is, arguably, as important, if not more so, in our own time, as it was then.

‘Distant Listening’, in that era, meant DXing in the service of peace, to a war-weary audience. The author analyses the period, in which what might be called ‘wireless internationalism’ was born. The idea was one of linking nations and individuals through the new medium of radio, in the hope of building a future world of peaceful international cooperation.

Achieving an understanding of cultural differences across the Europe of the time was felt to be all the more urgent against the background of the spectres of nationalism and fascism in the 1930s. It is no coincidence that some of the major international organisations were also founded during, or immediately after the two decades this title covers – and especially after the Second World War. And it is no surprise either that this was the golden era of radio magazines.

The book moves away from seeing broadcasting in the light of propaganda and focuses on how the medium helped to create a powerful sense of a global community., carrying listeners, in their homes, to far-away places and giving them a taste of different peoples, ‘soundscapes’ and cultures. This ‘transnational turn’ did not just affect broadcasting but politics too, and the book reflects this by offering a chronological approach in its first part, and a thematic one in its latter pages.

Following the Introductory Chapter (Pulling Down the Walls of the World), Sections Two and Three, entitled Fraternizing in the Ether, 1931-1933, and Rivalry and Competition, 1934-1937 respectively) examine radio broadcasting and ‘distant-listening’ both in – and towards – Britain. Here, the author contends that listening (and ‘DXing’) was always a profoundly transnational experience. Against this background, the BBC stood out as a strong promoter of the concept of wireless internationalism, and as a leader in the formation of the International Broadcasting Union (IBU). This is often forgotten today.

The ensuing period of ‘cultural propaganda’ via the BBC Empire Service (covered in more detail in Chapters Five and Six), was still, of course, broadly internationalist by nature, if focused less on Europe. These areas are discussed regarding fascist Italy and Germany in Chapters Three and Four (Wireless Nationalism, 1938-1939). In these central parts of the book, the author interrogates how British broadcasting at the time was influenced from abroad, and how, conversely, it sought to use the radio to secure British interests abroad, against a backdrop of the changing British domestic governments of the time.

These chapters, and also Chapter Five (The Shock Troops of Propaganda) on BBC overseas international news broadcasting during the 1930s, will be of particular interest to anyone studying the issue of the ‘independence’, ‘objectivity’ and ‘geopolitical neutrality’ of the BBC during this time, and the concept of ‘propaganda’ broadcasting, ‘wireless nationalism’, ‘soft-power’ or ‘cultural diplomacy’ in states deemed to be ‘democratic’.

It is fascinating to read, for example, how programme content and audience-targets altered, with the transition from the Empire Service (Chapter Six: The Lonely Listener in the Bush) to the Overseas Service at the beginning of World War Two (1939). Out went ‘expat-radio’, to be swiftly replaced by broadcasts aiming at Britain’s most significant allies.

More generally, the interplay between the key European (and international) crises of the 1930s and 1940s, an internationalist stance on radio, and the emergence of more and stronger transmitters and relays at the time forms the background to much of this book’s canvas, for example, with regard of World War Two, the Spanish Civil War or in respect of the Japanese invasion of China.

It follows that – while on the one hand, between 1934 and 1937 several laudable wireless internationalist initiatives were constituted – on the other hand, this dark era became the heyday of hateful propaganda broadcasting and ‘wireless nationalism’ (discussed at length in Chapter Four).

This is a well-researched title, which furnishes much historical background to a turbulent period in radio history. I accessed the online version of the book, rather than purchasing the rather pricey hardback.

However, If you are interested in the function of radio as an instrument of both peace and propaganda, this will be of great interest to you.