A Whistler TRX-2 Base Station scanner, which has been preloaded with more than 1,600 UK frequency channels. 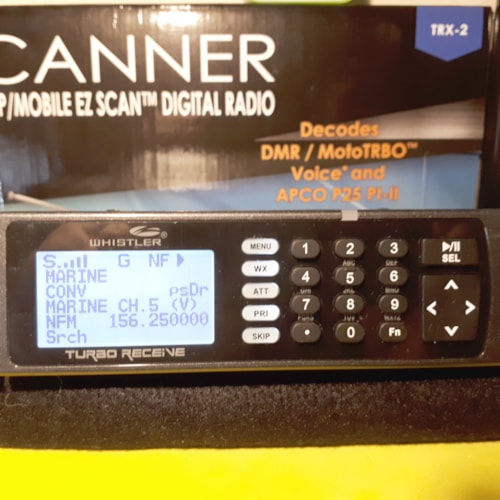 As wireless weekends go, this one was outstanding. It was unseasonably cold outdoors, the Lancashire rain was pattering down gently outside the window, in what is a typical British bank holiday weekend scenario, and I was trying to detect Morse code patterns in the rain’s soft knocking.

Two new aerials went on the roof this last week, one for HF and one for VHF/ UHF, and it is the latter that I now connected to my guest scanner for this weekend.

Chris Taylor (Moonraker) had been kind enough to lend me a Whistler TRX-2 Base Station scanner. The radio now comes with a host of frequencies, across a number of modes, pre-installed. I am not one for spending time programming radios, so I was curious what this ‘switch-it-on-and-let-it-fly’ radio could do.

And what it could do was impressive: the receiver goes through a short loading and verifying data sequence (Init SD File Sys) from the in-built SD-card at start-up.

This is, of course, not a full review of this scanner, I merely focus on some of those digital signals that my other scanners cannot resolve. I was pleasantly surprised by two things, in particular; first, the (digital) amateur radio activity I had so far missed; and, second, the amount of information available on the display.

I hope that the photographs on this page speak for themselves.

The radio also found many conventional marine and airband signals, which were new to me, and which are somewhat of a mainstay here in my north-western shack.

This scanner is well-known in the USA. Loaded with UK data, as in the model I had in my shack (and took mobile), this is an extremely capable and informative radio, which can significantly expand your horizons ‘straight out of the box’, as it were.

And I am not even going onto the details of the innumerable ways in which you can operate, tweak and customise this radio. The manual is online.

This article was featured in the June 2019 issue of Radio User.