Tim Kirby G4VXE gets to try out a new Yaesu handheld that offers an awful lot in a compact package. 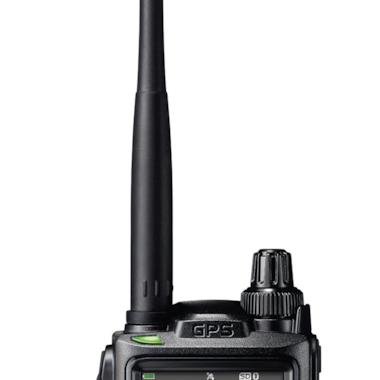 In the July 2016 issue of PW, we reviewed the predecessor to the FT- 3DE, the FT-2DE as part of our first series on System Fusion. It was a handheld I really liked and it wasn’t until earlier this year that I had the chance to own one. I should have known that something was about to happen because shortly after I’d bought my FT-2DE, their price dropped, always a sign that a new product is on the way! Sure enough, the FT-3DE was announced shortly afterwards and thanks to our friends at Martin Lynch & Sons, we have one to review.

As usual, I’ll start with noting what Yaesu have to say about the FT-3DE. Their description appears in the sidebar. As you can see, this little rig has a lot to offer.

I’d looked forward to the arrival of the FT-3DE. My FT-2DE is a handheld I enjoy using for C4FM (System Fusion), FM and APRS operation, so I was curious to see what had changed. The first impression, on unpacking was the slightly smaller size of the FT-3DE. It’s just a bit shorter (easier to fit in a pocket!), but the most striking thing on powering up was the colour touchscreen. Although it didn’t bother me on the FT-2DE, some people felt the mono LCD screen was slow and poor quality. Not entirely fair, perhaps, but the FT-3DE’s screen is definitely better quality and much sharper to read.

Because there’s no Fusion repeater around West Oxfordshire, my first test of the FT-3DE was to hook it up to my computer running the Wires-X software and use it in Personal Digital Node configuration to connect to the GB3SP repeater in Pembrokeshire. Martin GW3XJQ was on hand to give me an audio report and confirm that it sounded good. The initial test in PDN mode was in Direct Mode, where you use the rig essentially as a speaker/microphone connected to the computer by the optional SCU-19 cable, which I already had for use with the FT-2DE. Later, I tested the rig in Access Point mode, with the FT-3DE connected to the computer by the same cable but, this time, the rig transmits on a frequency of your choosing, so you’ll need another Fusion enabled rig to access it. I used my FT-2DE as the end user radio. This too worked fine and Martin GW3XJQ was on hand again (thank you!) to give another report.

I also tried the FT-3DE accessing the America Link ‘room’ using my ZUMspot hotspot. This worked well and I enjoyed a couple of contacts around the world in C4FM digital quality, with the callsign of the station transmitting being displayed on the FT-3DE’s screen. Because the FT- 3DE has an internal GPS, if the station you are listening to is transmitting a GPS position, the FT-3DE can show a distance and bearing of that station, which can be quite interesting.

If you have a Fusion repeater close to you, or other stations with C4FM capability nearby, you will be able to make use of the two digital voice modes DN (voice and data) and VW (high quality audio). As we’ve observed before in other Fusion reviews, the VW mode is fairly comparable to fully quieting FM in terms of speech quality. You can also take advantage of the Automatic Mode Select (AMS), which allows the rig to switch automatically between FM and C4FM transmissions. This happens very  quickly and is a useful feature.

GPS performance is good and I found the GPS would lock up fast, even with the rig inside the house − somewhat quicker, I felt, than the FT-2DE’s GPS. The Smart Navigation feature allows you to set waypoints (as you would on a ‘traditional GPS’) and navigate between them.

With the supplied rubber duck antenna and the rig inside the house, I found I was able to hear the GB3WH 145MHz FM repeater, some 15 miles away from me, with a  little noise. Sensitivity seemed about the same as with the FT-2DE and indeed, other handheld radios I have around the place. The rig’s sensitivity on 70cm seems at least as good as expected and I was able to monitor the GB3TD repeater near Swindon  quite comfortably, with the rig inside the house. I found FM (analogue) performance good, with received and transmitted audio quality reports being good.

The FT-3DE comes with a Bluetooth module installed as standard. Yaesu produce a  Bluetooth headset (SSMBT10) but say that other commercially available headsets may work. I didn’t have a proper Bluetooth headset available to test, but I did have a £10 set of Bluetooth headphones. I tried pairing the two and to my surprise, it worked, with receive audio coming out of the headphones. Transmit audio was available too, although I’d sayit was not of a quality to be proud of (the problem being in my cheap headset, of course!). You probably won’t need me to tell you that if you are planning to use a non-Yaesu Bluetooth headset, it is touch and go as to whether it will work because Bluetooth implementations seem to be surprisingly different. I asked a friend who is able to use an Anytone AT-878 Plus with the Bluetooth system in his Kia automobile whether the FT-3DE worked in the same way, but it did not appear to.

Something new to Yaesu with the FT-3DE is the Club Activity Monitor (CAM). With this feature, you can assign particular memory channels to a group (I created a Swindon group with the GB3WH and GB3TD repeaters as part of that group and a Reading group with the GB3RD, GB3AW and GB3BN repeaters). You can be listening on another channel, switch on the CAM and then you will see a display of the channels in the group you have selected. So, for example, assuming I’ve selected ‘Swindon’, there is a graphical display of two bars, one for GB3WH and one for GB3TD. When one of those channels becomes active, you’ll see that displayed on your screen. Editing the names of the channels and so on is a bit of a faff from the rig’s keyboard, no doubt easier from programming software. The feature is neat. I liked it as a very visual method of scanning. I wonder if firmware upgrades for other Yaesu rigs will include it in future. I’d actually assumed, reading about the feature, that it would be for C4FM channels only, but it works just fine for analogue too.

Incidentally, the CAM feature and some others, are described in the FT-3DE Advance (sic) Manual, which you can download from the Files section for the FT-3DE on the Yaesu website: https://tinyurl.com/y55q5gws There are various other optional manuals available to download, including ones for WIRES-X, Group Monitor (GM) and APRS, which you may wish to look at, depending on your interests.

The bandscope feature is somewhat similar, allowing you to graphically display where signals are found on the band – useful perhaps if you are new to an area. You can determine how many channels are checked − 19, 39 or 79. 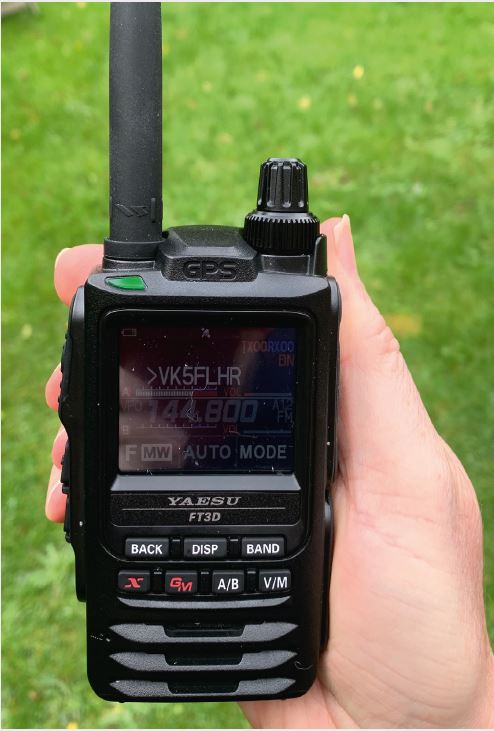 The FT-3DE has a wideband receiver, capable of 0.5-999.5MHz. It comes with some pre-stored memory channels; the US weather channels (not much use to us in the UK), International Marine Channels (useful depending on how close to the sea you are!) and some international shortwave frequencies. With the rubber duck antenna, I did not notice any of the shortwave frequencies booming in during the day but, of course, conditions are not terribly good and with a small antenna you should not expect too much.

One of the things I liked when I tried the FT-3DE’s little relative, the FT-70DR was the airband reception, which I thought was exceptional. The FT-3DE is similar and I was very pleased with the performance on the civil airband. The only minor disappointment in this regard (in common with many other rigs) was that although the military airband frequencies can be selected, you cannot select AM mode.

One of the things I like about the FT-2and the FT-3 models is their ability to ‘do’ APRS. I enjoy popping the handheld in a rucksack or a pocket on a walk and seeing what packets it picks up. If I get to a hilltop or other good location, I’ll launch a couple of beacon packets containing the GPS position and then, when I get home, I can see how far away I was heard, using the aprs.fi website. The APRS frequency for 1200 baud packet in Europe is 144.800MHz (144.390MHz for any North American readers!). You can also use the APRS features to listen to, and indeed, transmit, the digipeater on the International Space Station and a couple of other APRS-enabled satellites. For
that, you’ll need to tune to 145.825MHz. For satellite use, you might need to try a slightly more ‘gainy’ antenna than the supplied ‘rubber duck’ for reliable use, but you’ll almost certainly be able to get your signal digipeated, just using the antenna
provided.

Battery life seemed pretty good, although I felt that the colour screen probably drained the battery quicker than the FT-2 does, as you’d expect. Certainly, I didn’t have any problem with battery life, but I don’t think it’s of the ‘charge once and forget for a while’ type. You’ll probably need to expect to charge it every day or so, depending on how much you transmit, use the GPS and so on.

I was pleased to find that the accessories are interchangeable between the FT-2 and FT-3 models, so I was able to use my FT-2 charger (although of course, one is supplied with the FT-3DE), the SCU- 19 cable and, should you have one, the camera microphone. Batteries too, are interchangeable, which is good news if you have bought spares.

I enjoyed the FT-3DE. If you have a local Fusion repeater or have a digital hotspot, it could be a useful handheld for you. The ability to connect directly to the Yaesu WIRES-X network with the Personal Digital Node facility will expand your horizons. The capability to transmit and receive APRS packets is a useful and interesting one too. The quality of the colour touch screen is excellent and represents quite an improvement on the previous FT-2DE model. Transmitted and received audio was good in both analogue and digital modes.

This is obviously a high value handheld, compared with the many cheaper mostly Chinese units available, so you will probably only be interested in buying it if you are expecting to use the digital and APRS facilities of the unit. If you are wanting to use those facilities, I do not think you will be disappointed with the FT-3DE.

Our thanks to Martin Lynch and Sons for the loan of the review unit. It costs £379.95 (including VAT). See the ML&S website for details on how to order:
HamRadio.co.uk/FT3DE