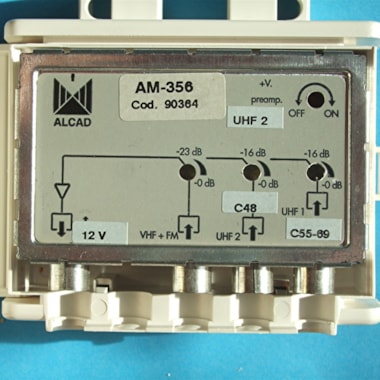 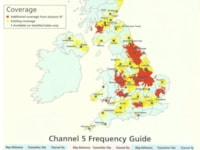 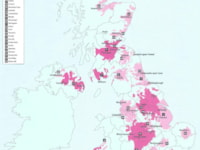 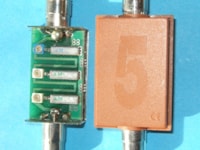 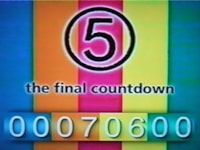 Channel 5 finally hit the airwaves on Easter Sunday, March 30th, 1997. It had lots of publicity right up to its introduction, but most of it was, alas, negative.

These days, we take it for granted when a new TV station is coming on-air. In fact, the Freeview channel listings seem to change as often as the weather. Twenty years ago, Channel 5 arrived, but what was so special about it?

It was the final analogue terrestrial TV channel to enter service on a national basis, although reception was limited in some areas of the country. Introducing the new network was quite an involved technical challenge.

Channel 4 had commenced broadcasting in 1982 but, apart from difficulties some viewers might have tuning in the TV receiver, there had been no significant issues.

Frequency allocation was always a major hurdle when introducing fresh TV networks. The original channel plan in the Sixties revolved around the UHF (Bands IV and V) network. This was capable of hosting a maximum of four channels per transmitter, both main and relay. The groups of channels were carefully spaced geographically, as far apart as possible, to prevent co-channel interference, even under conditions of mild tropospheric enhancement. A similar four-channel plan was also adopted in other countries.

Originally, BBC-2 had exclusive use of the UHF band spectrum until the introduction of BBC-1 and ITV colour on November 15th, 1969. The channel plan only allowed for one more service which was expected to be ITV-2, and some receiver push-buttons were marked accordingly in the late Sixties.

However, this did not happen. Instead, Channel Four was launched in 1982, thus completing the four channel slots per transmitter. Channels 35, 36, 37 and 38 remained unused in the United Kingdom.

All this careful planning was thrown out of the window when Channel 5 was in its infancy; the plan was to share the same frequency by all the main transmitters with scant regard to interference issues. If severe co-channel interference was created in some locations, then so be it. The phrase, “what the viewer never had, the viewer would never miss” springs to mind!

Several years earlier, the spectrum planners had assessed Channels 35 and 37 as possible contenders for the main high-power network, which would, hopefully, replicate the service area of the other four channels. In practice, this was not entirely feasible, as Channel 5 was to be aired from many of the old ITV transmitters with familiar names from the days of 405-line broadcasting in Band III. Some of these included Burnhope, Lichfield and Croydon.

There was one major stumbling block though: Most video recorder modulators were pre-tuned by the manufacturer to Channel 36. Generally, this was fine, as the nearest frequencies in use at the time were Channels 34 and 39.

The use of Channel 35 was originally not envisaged but, after second thoughts, plans were introduced, towards the end of 1996, for some transmitters to be allocated this channel.

In some areas, odd frequencies had to be utilised to prevent interference with much lower powers than the other four broadcasts from the same transmitter. These included Winter Hill on Channel 48 with 12.5kW ERP (Effective Radiated Power) – as opposed to 500kW – and Belmont on Channel 56 with 50kW, instead of 500kW.

The power-imbalance from some sites caused potential difficulties, not to mention the fact that most Channel 5 transmitters would radiate on frequencies outside the normal antenna group.

This meant that, in some cases, the signals were far from satisfactory unless a second antenna and, in some situations, a mast-head amplifier was deployed.

In some areas where broadcasts were obtained from a totally separate transmitter to the other four services, a second antenna was necessary; in other cases, multi-path reception (ghosting) was a problem, due to the differing receiving angles of the two transmissions.

Passive aerial group combiners were not the answer in many instances. One manufacturer that came to the rescue was Alcad, which produced mast-head amplifiers with selective inputs (Fig. 1). One was for the normal broadcasts and one for Channel 5. Signal levels could be adjusted on both inputs.

The limited coverage of Channel 5 across the UK (Figs. 2 and 3) was mainly down to frequency sharing, especially on Channels 35 and 37. In some areas, a co-channel mess was created where service areas overlapped. There were some parts of the UK, such as the south and south-east of England, which Channel 5 could not fully cover, as broadcasts might clash with Continental services. This suggested that there was at least some acknowledgement of potential interference issues.

A decision was finally made to make the new station available via satellite for those viewers unable to obtain a satisfactory terrestrial signal. So, in late April 1997, Channel 5 became available via the Astra satellite with ‘soft encryption’. This made the service available to a much wider audience and eased some of the problems.

In fact, the new channel became the first terrestrial station to launch on satellite.

There was the potential for the new Channel 5 transmissions to interfere with video recorder playback when the RF output was used. One condition of the new network hitting the airwaves was the mass retuning of video modulators (both video and satellite) in every home within the service areas that were considered vulnerable. This was a mammoth and controversial task, rather like when North Sea gas was introduced, and all gas appliances in every household had to be converted!

From the summer of 1996, teams of temporary recruits were trained by Granada on behalf of Channel 5, in order to achieve the retuning task. Channel 5 also secured the help of Granada and Thorn-EMI, owners of the two leading rental chains in the country at the time, to undertake their own rental retunes.

Armed with a signal generator and suitable trimming tools, the task meant re-tuning the RF modulators of every video recorder and satellite receiver, in order to prevent a signal clash within service areas where interference was predicted. A target of 90% of homes needed to be re-tuned before Channel 5 could air.

Therefore, millions of households needed to be visited.

The retuning requirement stipulated only modulator adjustment to prevent interference, rather than actually tuning in the TV ready to receive the new service. This led to confrontation when an address was visited where only a television was in use. The viewer would usually argue and demand that the TV should be tuned in, so they could view the new channel when it arrived. Most technicians would oblige to save time arguing and run the risk of not obtaining a signature to confirm that the address had been successfully dealt with. Many technicians worked on a commission-only basis.

There was no problem with interference on video playback if the SCART connection was used, but modulators still had to be reset because the RF output had the potential of producing patterning on the Channel 5 picture.

In cases where shifting the RF modulator frequency was a problem (for example, ‘daisy-chained’ video recorders), a ‘blocker’ or notch filter (Fig. 4) was fitted at the end of the antenna lead. This prevented the Channel 5 signal from reaching the equipment. Naturally, there was a slight insertion loss, leading to disgruntled viewers, in those cases where the effects were noticeable in marginal reception areas.

A Channel 37 filter provided approximately 40dB of attenuation but only a 3db loss on Channel 36, which most video recorders had their modulators tuned to. The loss two channels away (Channel 35) was just 2dB. The filter bore the ‘5’ logo but the plastic casing colour (black, cream, brown or blue) did not necessarily indicate any particular channel.

The filter was also supplied to those households where, in a small number of cases, entry was refused because they did not want the technician to touch the equipment.

Technicians were expected to retune the equipment to specific frequencies, using the generator’s pre-programmed outputs. However, patterning was a problem with some equipment, and a few tweaks were necessary.

In the Derby area, the recommended video output channel was 33. However, when digital transmitters began testing during the late summer of 1998, one of the Waltham multiplexes had been assigned Channel 33, which then totally obscured video playback at RF.

One of the biggest headaches was the complexity of some of the tuning methods used by different manufacturers. With some models, the technician could be in and out of the premises within minutes, with the job sheet duly signed. With other makes, a feeling of defeat would quickly set in, with the viewer convinced that the technician hadn’t a clue what they were doing. This led to a plethora of complaints, some justified, some not.

Once the tabloid newspapers had added their pennyworth there was definitely ‘trouble at mill’! The press had a field day and ran stories of how the teams messed up viewers’ equipment with tales of ‘My car blew up on the driveway as the engineer fiddled with my telly’ and ‘Channel 5 man attacked my pet gorilla with his generator’.

The re-tuning programme developed a rather tarnished image, and some viewers refused point-blank to allow their equipment to be even touched, never mind re-tuned, thanks to tabloid ‘scaremongering’.

Simple substitute remote controls were a bugbear because many did not have the facility to adjust the TV tuning.

Fortunately, some models did have a set of controls beneath a concealed flap, but not all of them.

Some antenna sockets, especially those on video recorders and satellite receivers, were already hanging loose.

Connecting the signal generator became the last straw, resulting in call-backs for intermittently snowy pictures, due to fractured connections.

Initially, the channel was set to launch on January 1st, 1997, but when Channel 35 was released for use by the DTI on September 16th, 1996, the start date was delayed, so that an extra four million viewers would be able to watch the channel right from the start.

Therefore, the new station officially appeared on our screens on Sunday, March 30th, 1997 at 6.00pm.

Mock colour bars with a countdown clock ticked away the final seconds before the well-publicised, but controversial, station was unleashed (Fig. 5).

The Spice Girls were in vogue at the time and these ‘Ambassadors of Britain’ (as the prime minister of the day dubiously dubbed them!) performed the opening ceremony with a specially-written song called The Channel 5 Theme.

The Spice Girls were set to become the main weapon in the channel’s ratings war, according to the chief executive at the time, David Elstein.

The station was the first terrestrial broadcaster to display an on-screen logo, and this generated lots of viewer complaints. European broadcasters had been displaying logos for many years, and the viewing public took them all in their stride.

The logo (technically referred to within BBC circles as the ‘Digitally Originated Graphic’ or ‘Digital On-screen Graphic’, but usually just ‘DOG’ for short!) was eventually toned down to give it a more transparent, less intrusive, appearance.

The logo was displayed in the top-left of the picture.

In Part Two, next month, we will be looking at test transmissions, transmitter launches, presenters and the transmitter switch-on timetable.