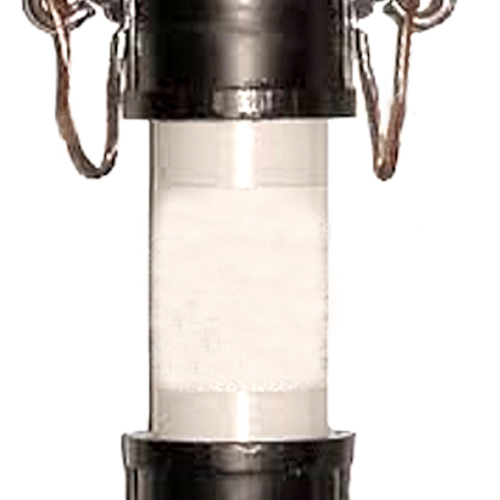 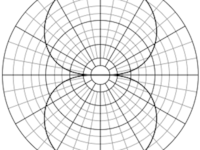 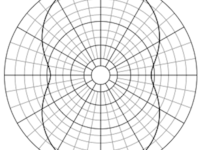 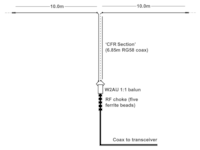 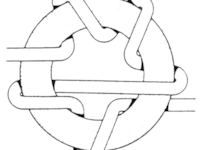 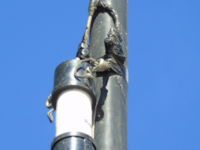 Steve Telenius-Lowe PJ4DX resurrects an antenna design that first saw the light of day almost 30 years ago but seems to have been largely forgotten since.

Since becoming active as PJ4DX I have been using vertical antennas on 40m. The first was a Butternut HF2V, followed by a pair of phased quarter-wave verticals with elevated radials (see A Practical 40m Beam for the Small Garden, PW, April 2015) and then (because I wanted omni-directional coverage) a single one of those verticals.

All these worked well but recently I decided to try a 40m horizontal dipole to see how it compared. What transpired was a result of my particular set of circumstances.

I had been given an old and well-used W2AU-type 1:1 balun, Fig. 1, but the only suitable antenna support I had was a 12m Spiderbeam fibreglass pole. These are ideal for vertical antennas but the top section is too spindly to support the weight of horizontal wires. Even with the pole’s top section removed, I didn’t want to put the balun at the top because I felt its weight, added to that of the wires, would cause the pole to bend too much. Nor did I want to remove the pole’s second section because I wanted the dipole to be as high as possible.

I felt the balun should be used because if a dipole is fed by coax without one, the feeder itself can also radiate, upsetting the dipole’s figure-of-eight radiation pattern, Fig. 2. Although the precise radiation pattern wasn’t important, a radiating feedline can potentially lead to EMC (electromagnetic compatibility) problems such as interference to televisions, computer monitors, internet routers, hi-fi systems and the like, particularly if using high power. I wanted to ensure I didn’t cause interference either to my own equipment or to that of my neighbours.

Radiation from the feeder is not in itself a bad thing. What if you could control that radiation and have it only where you want it to be? I remembered the design of the Carolina Windom® [1], in which a ‘line isolator’ (presumably an RF choke) is placed some way down the coaxial feeder, creating a vertical coax section that is intended to radiate. The line isolator prevents radiation from the remainder of the coax to the station. In the ‘Carolina Windom 80’ this vertical section is 22ft (6.70m) long. I don’t know why that length was chosen by the antenna’s designers but I calculated that, on the 40m band, a quarter-wave of RG58 cable, when multiplied by its velocity factor of 0.66, is 23ft long. I happened to have a gash length of RG58 a little longer than that so, compromising, I cut it to 22ft 6in (6.85m). (And, rather than throw out the remainder, I put PL259 plugs on either end – you can never have too many patch leads!)

The W2AU balun was connected at the bottom of the length of RG58, Fig. 3, and, because this is a voltage-type balun, I added five large ferrite beads over the feeder below the balun to act as an RF choke. This resulted in a perfectly standard dipole except that the balun was connected 6.85m down the feeder, rather than at its feedpoint, Fig. 4.

An electrical quarter-wave transmission line – which is what the vertical radiating element is – will also act as an impedance transformer. This means that the dipole’s 73W impedance will be transformed to a different value at the balun. Would this be a problem, I wondered?

If 50W coax is used to feed a half-wave dipole in the centre, there will be a mismatch causing an SWR of 73 ÷ 50 = 1.46:1. As anyone who has ever done this will know, it’s of little consequence. The antenna is able to accept power and radiates perfectly well (although the feeder may also radiate, as discussed earlier).

Zi is the input impedance;

Z0 is the characteristic impedance of the transmission line (in this case the RG58’s 50W); and

Zl is the load impedance (in this case the dipole’s 73W).

Zi (the impedance at the bottom of the RG58 vertical radiating section) should therefore be 502 = 2500 divided by 73 = 34.2W. The SWR at the balun should therefore be 50 ÷ 34.2 = 1.46:1 and, sure enough, this was very close to the actual SWR measured on an antenna analyser (it’s always good when practice confirms the theory!). A 1.46:1 SWR is the same as that expected if a dipole is fed with no matching transformer and is of no concern.

There’s nothing new under the sun! Having already put up my dipole with its electrical quarter-wave vertical section, a few days later I stumbled across an article called Controlled feeder radiation by Bill Sykes G2HCG in the May 1990 RSGB Radio Communication. Bill was the founder of the J-Beam antenna company and he coined the term CFR, also calling the coaxial cable vertical radiating part of the antenna system the “CFR section”.

While G2HCG stated his CFR section was a quarter-wave long, the length he actually used was 0.275l, so it was rather longer than a quarter-wave, and he didn’t take the cable’s velocity factor into account. Sykes’s CFR dipole was designed for 20m and his 0.275l CFR section was 19ft (5.79m) so – if built to his specifications – my 40m antenna would have had a CFR section 11.54m (37ft 10in) long.

The balun used by G2HCG was a simple coaxial choke wound on a ferrite ring, Fig. 5. He said there should be a minimum of five turns on each side of the ferrite and that it should cover 10 to 20m; for 40m two ferrite rings should be used.

G2HCG claimed the particular length of CFR section he used transforms the 73W at the centre of the dipole to closer to 50W, thus providing a better match to the coax used for the remainder of the feeder. With the length I used, the impedance was transformed to around 35W.

In addition to the dipole, G2HCG described several other antennas in which the CFR technique could be used, including a half-square and a modified Bobtail array. It would be interesting to try some of these but that is for another day.

How Did the Antenna Work?

Actually, the antenna worked very well. The manufacturer of the Carolina Windom claims that the addition of the vertical radiating section can provide up to 10dB gain over a standard dipole under certain circumstances. Certainly, a low horizontal dipole radiates most of its power straight upwards (and anything under about 40m (130ft) can be considered ‘low’ on 80m) so for long-distance DX contacts on 80m this claim is not unreasonable.

I wondered if the vertical section of RG58 in my CFR dipole would radiate a low-angle signal and provide some gain, as claimed for the Carolina Windom? Unfortunately, I had no ‘standard’ 40m dipole with which to compare its performance although I did have a quarter-wave vertical (one half of the phased vertical array described in the April 2015 PW article). Over a period of several weeks I made numerous A/B comparisons between the two antennas. Details are provided in Table 1 but can be summarised by saying that local and semi-local stations were stronger on the CFR dipole, sometimes by up to 20dB. No surprise there. The dipole is only just over a quarter-wavelength above ground so it would be expected to produce high-angle radiation favouring local and semi-local stations. More distant stations in Europe – from around 7,000 to 9,000km away – were generally stronger (and in one case 10dB stronger) on the vertical (although some reported no noticeable difference between the two antennas).

What surprised me, though, was that more distant stations (10,000km plus) were either as good, or better, on the CFR dipole. The vertical would be expected to perform best on very long-haul DX, yet long-path signals from Japan (26,000km away) were at least as good on the CFR dipole. I worked several Indonesian stations, located close to my antipodes 20,000km away, and there was either no difference or the CFR dipole was better, in one case by 2 S-units. In no case was the vertical better on long-path signals to Japan or Indonesia.

Another factor comes into play here. The CFR dipole was noticeably quieter on receive: band noise plus local noise was about 1 to 2 S-points lower on the CFR dipole. This is to be expected. Verticals are known to be noisy on receive even if they transmit good signals. Two DXpeditions to rare DXCC entities (6O6O in Somalia and E31A in Eritrea) active in January were inaudible on the vertical (below the noise level) but workable on the CFR dipole. As the old saying goes, “you have to hear them to work them”, and if I had only had the vertical I would not have been able to make a 40m QSO with 6O6O, who was about 449 on CW on the CFR dipole.

Due to space restrictions I can’t put up a ‘standard’ dipole at the same time as the CFR dipole. I can’t be certain that the vertical section of RG58 in the CFR dipole is providing low-angle radiation. Without an antenna range I can’t prove that the CFR dipole has gain at any radiation angle, compared with a standard dipole. All I can say for sure is that I was surprised to find that the CFR dipole was as good as, or better than, the vertical on almost all signals except those in Europe. This was confirmed on transmission tests as well as on received signals.

Although G2HCG wrote about controlled feeder radiation 28 years ago and the commercial Carolina Windom antennas have used the technique for many years, I have not seen any references to CFR in antenna books or in recent articles. If others have tried the CFR dipole I would be interested to hear:

a. If extending the CFR section to a physical 0.275l helps to transform the impedance to close to 50W, rather than the 34 – 35W that occurs with an electrical quarter-wave CFR section;

b. If vertical radiation from the CFR section can be proved to exist;

c. If changing the length of the CFR section has any effect on the amount of vertical radiation;

d. What the optimum length of the CFR section is;

e. If a CFR dipole and a standard dipole at the same height could be compared, is there any real difference in performance, particularly with long-haul signals (greater than about 12,000km)?

f. If it’s possible to mount horizontal dipoles more than a half-wave above ground, is there any advantage in using a CFR dipole, or is the low-angle radiation from a high standard dipole as good as that from a CFR dipole?

g. To put the previous question the other way around: if it is only possible to mount dipoles relatively close to the ground, does the CFR dipole then have an advantage over a standard dipole?

As may be gathered, I’m slightly sceptical about whether the CFR dipole is really producing low-angle radiation. However, the proof of the pudding is in the eating and the one I made worked better than I expected for long-haul DX – so I’m not complaining!

Table 1: Summary of many A/B comparisons between the CFR dipole and a quarter-wave vertical (stations marked * were worked via long path, so distances are greater than 20,000km).

[1] Carolina Windom® antennas are made in the USA by Radio Works (www.radioworks.com). Carolina Windom is a registered trademark and the designs of the various versions are protected by copyrights and trademarks owned by Jim Thompson W4THU. On the website W4THU states that he is now retiring and is no longer selling his products outside the USA.

The Best Radio Museums in the UK and Abroad

A New Antenna from Moonraker

A New Digital Handheld from Icom

A New SDR from the Far East