Internet radio programmes and podcasts covering environmental issues have ballooned in the past couple of years... 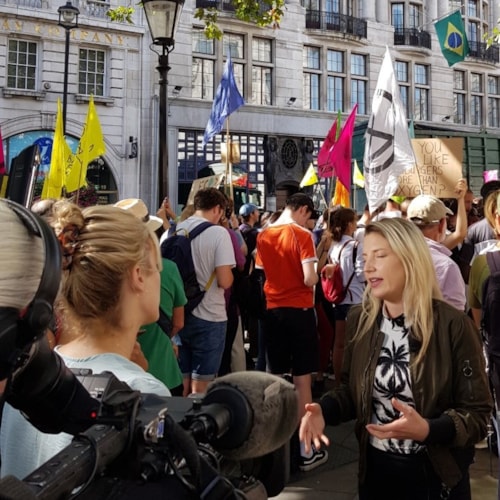 ...Most of these involve a high degree of motivating activists, as well as informing members of the public who have become aware of climate change's impacts and want to readjust their lifestyle accordingly.

Extinction Rebellion has grown as a grassroots response to the global – and scientifically-proven – climate emergency (Fig. 4). It has its own podcast in the UK. There is another one, called Extinction Rebellion: Climate Change For Beginners, with Dr Ciaran O'Carroll. In October 2019, Soho Radio was run by Extinction Rebellion for two weeks. Titled Rebel Radio, it included debriefs from leading campaigners and Kate Hutchinson (from the Last Bohemians podcast) presented the Don't Drive Time show.

Many mainstream media like to have leaders or spokespeople to target, as that is easier to report on and criticise than non-hierarchal mass movements. Despite this, Greta Thunberg – very much in the public eye at the moment – has won many awards last year, including Radio Romania International's Personality of the Year. She has appeared on and been the subject of, many podcasts, including Ted Talks, The Guardian's Today In Focus and CBC's Frontburner.

National organisations The National Trust and the Woodland Trust are conservative environmental charities supported by hundreds of thousands in the UK; they are often a far cry from radical grassroots activists. Yet, they both now produce podcasts to promulgate their work to members and to new audiences.

Homebuilding and ‘living off-the-grid’ are becoming very popular ways for those who want to ‘opt-out’ of society. The Centre For Alternative Technology (CAT) in Machynlleth, North Wales is a good example of community-living with a sustainable lifestyle cooperative. Its statements include the following: "Radical action is needed if we are to avoid dangerous climate breakdown. CAT offers practical solutions and hands-on learning to help create a zero-carbon world." Needless to say, CAT has hosted its own podcast for many years.
www.cat.org.uk/?s=podcast

Eating less meat is now becoming accepted as being a feasible way for societies to combat climate change. There are many dietary podcasts and independent radio programmes that discuss and encourage this. One example is Vegan Activist Radio, produced and hosted by Cheryl Sobie. In it, Cheryl, "explores the topic of animal rights activism, exposes injustice in the world, and shares interviews from activists who have mobilized and are creating change in the world. On Vegan Activist Radio I interview activists from across North America about their work and what they are doing on the ground to help animals, challenge speciesism, and fight for animal liberation."