Chrissy Brand reports from the 2018 European DX Council Conference, held in Slovakia and Austria in the late summer 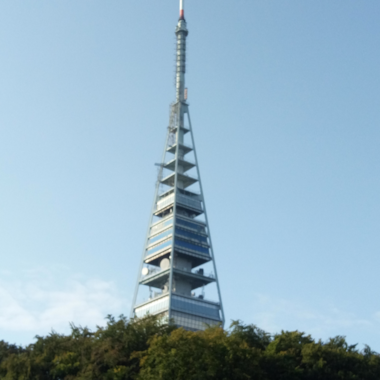 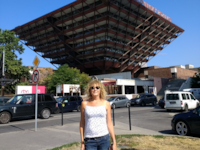 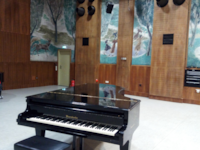 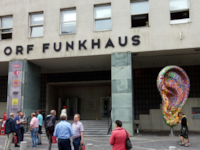 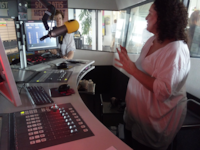 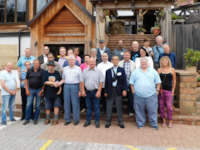 I began writing this month's column from the Slovak capital of Bratislava, where I attended the annual European DX Council conference. Delegates were spoilt for choice, with visits to three radio organisations, a television tower, and a medium wave transmitter mast.

Furthermore, there was an impressive array of lectures and presentations, ranging from the work of the HFCC and the best aerials for an urban environment, to DXing in India. The enjoyable social programme led to a busy few days.

The EDXC conference venue was at the Hotel West, in forested hills just to the north of Bratislava. There were wonderful woodland walks and vistas towards the Little Carpathians mountain range. Nearby, the Soviet-era Kamzik TV tower (Fig. 1) dominated the view; at night, parts of it were bathed in red light. With clouds scudding past, it resembled an alien craft. The restaurant in the tower served fantastic food and afforded great panoramic views into Austria and Hungary as well as across Bratislava, including Slovak Radio’s upside-down pyramid building. Many local radio stations transmit their signal from the tower, including Fun Radio. Radio Expres, Radio Viva, Europa and Radio Devin.

The visit to Slovensky rozhlas (Slovak Radio) gave us an enticing glimpse into a national broadcaster, one that still proudly hosts several language services for a global audience, as well as several other national stations. Anca Dragu, of Radio Slovakia International’s English Service, showed us around.

Architecturally, this is surely the most distinctive radio building on the planet (Fig. 2). Work on the building commenced in 1969. Its eleven stories were originally meant to accommodate 1,500 people. However, this figure was never reached because, over the many years of construction, broadcast and office technology evolved, resulting in a need for less space and fewer employees. A total of 350 staff currently work there.

At least 35% of music played on the air in Slovakia must be Slovak, and 20% of that must be new music. Radio Slovakia International can be heard via WRMI on short wave, locally on 98.9 MHz after 1800 local time and online. During the day, the FM frequency is used by Radio Patria, Slovensky rozhlas’ station for the country’s Hungarian-speaking population and for other minority groups. Radio Patria also uses 1098kHz medium wave.

After the conference sessions had concluded, delegates decamped to Vienna. Along with a social programme, there were visits to two more radio station buildings. Krone Hit and ORF.

Commercial radio was legalised in Austria in 1995 (only Belarus was later), and stations came on the air from 1998.

Krone Hit is a national station aimed at the youth market. It plays the usual mainstream music heard on radio dials everywhere. Our tour included meeting DJ Christian Mederitsch during his live show. He has been in radio for seventeen years and at Krone Hit for the past ten.

A visit to the grand ORF building was a real treat (Fig. 4). Its 1930s grandeur is very impressive, from the foyer to the concert hall studios. I was awed by Studio 3, which had its original wood panelling and many murals depicting rural scenes (Fig. 3).

As a youngster, 24 years ago, Riem Higazi was one of the founders of the ORF FM4 station (Fig. 5). It was set up as an alternative music station. Riem is still working for the station today. FM4 effectively subsumed Blue Danube Radio. That was an English-speaking station with an adult contemporary music format, which was started in the early 1980s for UN employees in Vienna. Some former Blue Danube Radio employees still work for FM4 today.

You can hear FM4 online and through an app and it’s worthwhile listening. Although aimed at a younger audience, I am a regular listener and enjoy the music and features. FM4 airs in English from 0200 to 1400, then in German from 1400 to 0200. All news broadcasts are in English though, and some in the mornings are in French.

You may also wish to read about my previous visit to Radio Slovakia International and ORF (RadioUser, January 2017: 40).

The conference sessions covered many aspects of the world of broadcast radio (Fig. 6). Jarmo Salvi (Finnish DX Association) spoke about ‘Small Antennae [sic] in Urban Environments’. He successfully used many variations: a cheap dipole antenna, a magnetic loop antenna with amplifiers, a PA0RDT mini whip hung outside the building, an MFJ-1022, and an MFJ-1024 active aerial.

CK Raman from India spoke of the DX catches made in that country, where DXing is a very popular hobby. Listening in the east of India on medium wave, in the best conditions, stations can be heard from Cambodia, China, Laos, Nepal and Thailand. To the south, the band is crowded with stations from Sri Lanka and the Maldives for the dedicated DXer to monitor. Stations heard can include Laos on 567kHz, Kyrgyz Radio on 612kHz, Japan on 828 and 873kHz and the Philippines on 1530kHz.

The familiar story of China Radio International being dominant on short wave is, to some degree, counterbalanced by the FM catches that have included stations in Bangladesh, Myanmar, Nepal, Thailand and Turkmenistan. Tips are often shared by Indian DXers via a WhatsApp group. Short wave still has its attractions, with Brazil heard on 11780kHz, Radio Clube do Para on 4885kHz and Radio Tarma in Peru on 4775kHz. Radio Tarma is celebrating its 60th anniversary this year.

CK played some audio files of his and other Indian DXers’ catches. These included BBC Radio 4 on 198kHz, the Czech Republic on 270kHz, and Turkmenistan on 279kHz.

Local host Harald Seuss of the Austrian DX Club gave an informative presentation on the history of GMT. The journey to a global time format came about partly through the need of 19th Century railway companies to unify the different time zones within countries. The Washington DC Meridian Conference of October 1864 was also a key step. However, a forerunner in the GMT story was a paper entitled A Proposal to Determine our Latitude, put forward by English scientific writer Jane Squire in 1743.

Jeff White (General Manager, WRMI) gave a presentation about WRMI and HFCC, aided by Thais White (Office and Travel Manager, WRMI). WRMI began back in 1989, renting airtime from WHRI and other US stations. Its modest start led to a WRMI 50kW transmitter north-west of Miami going on the air in 1994. WRMI started on 9955kHz from Okeechobee, Florida on December 1st, 2013.

As well as relaying current programmes of many former short wave stalwarts like Radio Prague, Radio Argentina al Exterior and Radio Slovakia International, WRMI has reported live from special events, including the SWL Winter Fest in Pennsylvania. Jeff interviewed some of the EDXC conference delegates for use in Wavescan programmes this autumn.

Throughout September and October, WRMI transmitted Radio Marti’s Spanish commentaries of US baseball matches featuring Cuban players, towards Cuba. These were on 5950kHz on Sundays 2000 to 000 UTC; and Tuesdays and Wednesdays from 2300 to 0200 UTC. If the pilot is successful, these broadcasts will be rolled out as regular programming for the 2019 baseball season.

The HFCC Conference for the B18 season also took place in Bratislava in August. Interviews conducted during the event will also air on Wavescan. At the HFCC Conferences, each night, frequency lists for the forthcoming season are produced. Overnight, broadcasters’ representatives check for any clashes of frequencies. Any issues are hopefully resolved the next day.

Jukka Kotavirta (Finnish DX Association) summed up the 2018 FM season as being “disappointing”. However, a few Portuguese stations were heard in Finland in June.

An EDXC trip over the border into Hungary included a stop at the medium wave mast site operated by Antenna Hungaria, near Mosonmagyaróvár. Radio Danko on 1161kHz is transmitted from here.

Paul Glover in Worthing hears Radio Kuwait regularly, from 0700 to 0900 on 15530kHz with just a little fading.

Lionel Clyne noted that the number of Overcomer Ministry broadcasts have increased. After the station’s supremo Brother Stair was arrested last December, most of the Overcomer Ministry’s transmissions went off the air. However, there was a steady increase throughout the summer, which included a temporary eight-hour weekday slot of airtime on Channel 292 in Germany. Lionel heard one of these transmissions at 0850 UTC on 6070kHz, with a 44233 SINPO.

The Voice of Korea was received at 1449 UTC, broadcasting in French from Kujang on 15245kHz. The programme content consisted of an announcement in French and mostly music, “on the popular spectrum of North Korean music, as far as that exists.” Lionel compared that with the English language transmission logged on the previous day at 1525 UTC on 13760kHz and a 44233 SINPO. It was, “mainly martial music, plus a choir and orchestral accompaniment with more than just a hint of western flavour.”

Lionel also heard Bible Voice at 1827 UTC on 6295kHz in English with a 44233 SINPO and witnessed what he described as, “Dreary sermonising delivered in typical transatlantic ‘newspeak’.”

Graham Smith observed a mysterious station on 981kHz playing classical music in the middle of the night. He wrote, “It isn't the Czech station Český Impuls because I can hear that in the background, and it isn't Algeria because the station comes from an east-west direction. I think it is Radio Trst, broadcasting in Slovenian from Trieste, Italy.”

Tony Stickells’ log highlights in August and September were three Indian stations on the 60m band and a nice selection of South American signals. He also heard Shiokaze (Radio Sea Breeze) on 7215kHz, in English, from Japan. This station started in 2005 and is operated by COMJAN (The ‘Investigation on Missing Japanese Probably Related to North Korea’).

Ydun Ritz pointed out that the World Music Radio 5840kHz transmitter is located in Randers in Denmark and not in Karup, as was stated in a previous RadioUser log.