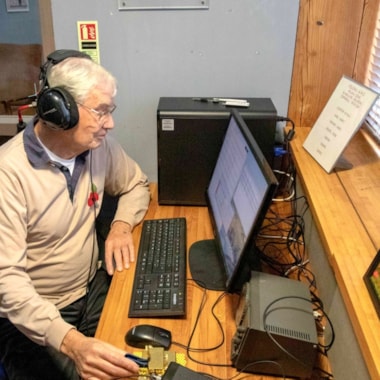 Members of the Poldhu Amateur Radio Club commemorated the end of the First World War by operating a special station from the Marconi Centre at Poldhu from November 9th to 12th.

GB100MPD was used with ‘MPD’ being the callsign used by the station at Poldhu during WW1.

Following Marconi’s achievement of transmitting a signal across the Atlantic Ocean in 1901, radio communication rapidly improved and many ships were fitted with the new radio sets. The wireless station at Poldhu used the callsign ZZ until the outbreak of the war when the Admiralty took over the station’s running. The day war broke out, the station sent a signal to all British ships that hostilities had begun and that ships were not to enter German ports. MPD was the callsign used throughout the war and on November 11th 1918, Marshal Foch sent a signal from Paris stating that hostilities had ended. This message was transmitted to all the British ships from Poldhu, again using the callsign MPD.

Nearly 300 members of the Marconi Company lost their lives in the conflict, many aboard ships as radio operators. Now their lives have been commemorated by the radio amateurs at Poldhu. The event proved to be very successful with stations contacted all over Europe and Asia and also into North America using voice and Morse code. On the Friday, a BBC reporter, Jen Smith and a cameraman came to Poldhu to film the operation and to interview some of the members. The piece was broadcast on local BBC Spotlight.