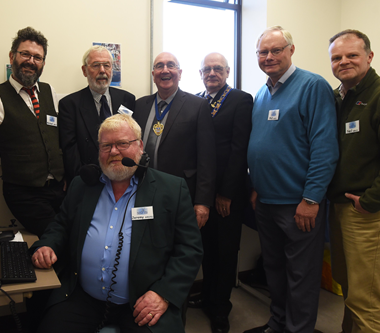 Describing the new station to the assembled party, Jeremy Willis G4DOQ, Chairman of the Newbury And District Amateur Radio Society (NADARS) explained that the project will allow its members to use the latest technology to transmit Voice, Morse code and Data modes around the world on the HF bands. Included in the station will be a satellite terminal to receive and transmit through the QO-100 geostationary satellite and a DR1XE UHF Fusion repeater station donated by Yaesu UK. Jeremy said, “NADARS has been looking for a location to set up a permanent station for some time and the location of Greenham Control Tower exactly fits our criteria. The site was built to house radio and having a cafe on the same floor is a real bonus. We are very grateful to Greenham Parish Council and Greenham Control Tower Limited for their help and support in allowing the project to materialise. We hope to have the station open to the general public, operating on some Saturdays during each month”.

NADARS have equipped the station with a Flex-6500 and Maestro and the members will be building the satellite transmitter as a club project. The UHF Fusion repeater will be accommodated in the radio room and is expected to be issued the callsign GB7NT by Ofcom.

Planning permission had to be gained to erect suitable poles on the roof of the building and an inverted-V 80m doublet is in situ along with an 80cm satellite dish and VHF/UHF collinear antenna.

David Wilson thanked the NADARS committee for the invitation to attend the formal opening of the station and congratulated them on the foresight and level of technology that the station had been equipped with. Details about NADARS and when the station will be operational are available at: www.nadars.org.uk