Find out what is inside this month's issue. 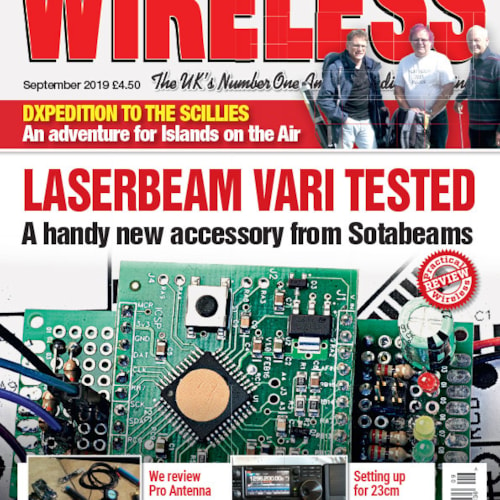 The September 2019 issue of Practical Wireless is now available.

LASERBEAM-VARI from SOTABEAMS reviewed: Tex Swann G1TEX makes a welcome return to PW with a look at a handy accessory from SOTABEAMS, a variable digital audio filter.

Getting Going on 23cm (Part 3): Sam Jewell G4DDK completes his look at 23cm by covering the practicalities of setting up your first station for the band.

Carrying on the Practical Way: Tim Hier 2E0TWG recommends the simple doublet as an effective multiband homebrew antenna for a small garden or a newcomer to HF.

Making Waves: Steve White G3ZVW discusses terrestrial television broadcasting and why the transmitting antennas are located on such tall towers.

HF Highlights: As well as the usual roundup of news, Steve Telenius-Lowe PJ4DX introduces the autumn contest season, covers a 50th anniversary and shares another bugbear.

In the Footsteps of Marconi: Joe Chester MW1MWD has his first successes as GB9GGM, emulating what Marconi did all those years ago.

The World of VHF: Tim Kirby G4VXE starts his column with both good and bad news regarding the 2m band.

Kits and Modules: Geoff Theasby G8BMI has another oscilloscope suggestion, followed by a digital filter.

What Next: Colin Redwood G6MXL looks at front-to-back ratio of antennas and suggests some places in Cornwall of interest to radio amateurs.

Data Modes: Mike Richards G4WNC gets excited by the latest incarnation of the Raspberry Pi.

Isles of Scilly Expedition April 2019: Hot on the heels of last month’s advice on undertaking an IOTA DXpedition, here’s a story of one such trip.

Starting Over: Lee Aldridge G4EJB is back with a tale of electrostatic discharge precautions, persistence and tree felling.

How to decipher the Instructions in Chinese Hobby Kits: Donard de Cogan M0KRK offers some advice on deciphering Chinese instructions that often come with those Far Eastern kits.

Doing it by Design: Eric Edwards GW8LJJ describes an accurate calibrator for your S meter.