RadioUser July is on sale

Space and War, Anniversaries and Essential Reviews: The July Issue of RadioUser 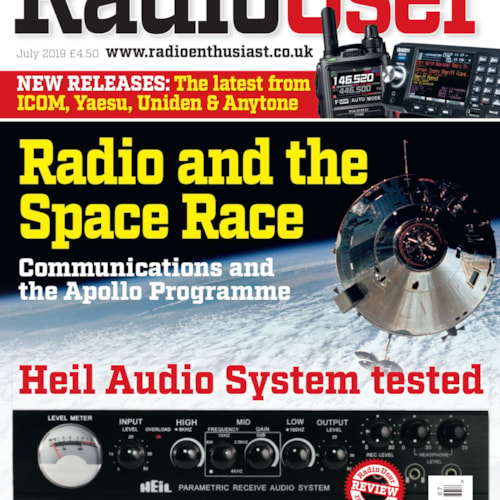 The July 2019 issue of RadioUser offers you somewhat of a space-theme, and it commemorates two historically significant anniversaries. We also have three essential reviews of new radio equipment and receivers.

First off, is the 50th Anniversary of the Apollo 11 Moon Landings this summer. Scott Caldwell celebrates this event in his Radio in History column this month, investigating the vital role that radio communications played before, during and after the Apollo Space Programme. In his in-depth piece, Scott looks at both the two-way communications between Earth and the Apollo Astronauts, and at the way in which radio stations, radio amateurs and broadcasters brought this unique world history event to a global audience.

We continue the space theme with an article by Michael Knowles, who recalls the impressive radio-astronomy achievements of Dame Jocelyn Bell Burnell, the British discoverer of Pulsars – and one of the editor’s radio heroines.

The second key milestone this month is the 75th Anniversary of D-Day and of the liberation of Europe from the Nazi yoke. Check out David Harris’s book review this month. Unusually for RadioUser, he is reviewing a ‘radio-novel’, which paints an amazing picture of the period, and for which its author has used and interpreted exclusive excerpts from original contemporary broadcasts of the period.

Back in the present, it is the drastic changes to local and community radio, which are catching the editor’s eye this month. Andrew Billen, writing in The Times (7th June 2019: 8) calls Ofcom’s rule changes “the death knell for local radio stations” and claims that “the airwaves are misty with teardrops”. Much ado about nothing? Find out in July’s RadioUser.

Elsewhere in this issue, we have an especially full basket of radio goodies this month: Amazingly, Nils Schiffhauer has had quite unprecedented access to a German manufacturer of professional monitoring equipment. In a lively portrait, Ian Brothwell introduces the British Amateur Radio Teledata Group (BARTG), and Ydun Ritz outlines the well-known Danish radio station World Music Radio (WMR).

You will also find Part Two of our indispensable 2019 RadioUser Air Show Guide, as the air show and event season is well underway now. Plus, there is the second instalment of our Keith Hamer’s and Garry Smith’s vital series on Sporadic-E Propagation and FM/ TV DXing, which should be of interest whatever your own hobby radio interest.

There are also some brilliant reviews on offer this month: Tim Kirby looks at the Heil Parametric Receive Audio System (PRAS), Kevin Ryan presents new digital receivers, Robert Connolly reports on the Icom IC-M506GE maritime transceiver, and Chris Rolinson shares his findings around new network radios.
In other columns, you will learn more about aerial connectors, radio conferences in Europe and the USA, and about using SDR to receive AIS signals.
Our News and Products section this month is especially full: Once again, it is a veritable treasure-trove of new equipment, and we also have another book review this time, especially for short wave enthusiasts.

Enjoy this issue of RadioUser.