RAFARS Airfields on the Air

​​​​​​​On April 20th and 21st permission was granted to put on a special event amateur station using the callsign GB0WY at RAF Wyton, Cambridgeshire. 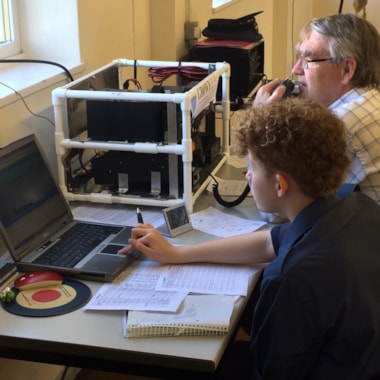 On April 20th and 21st permission was granted to put on a special event amateur station using the callsign GB0WY at RAF Wyton, Cambridgeshire. This was the sixth year that the activity has taken place on the station. Its location and previous history are always a source of discussion on air and the activity is popular with many radio amateurs who have worked at, flown from or visited the station.

By inviting Cadets and Staff from local RAF Air Cadet (RAFAC) Squadrons and the Event Team from the Huntingdonshire Amateur Radio Society (HARS) a suitable radio station was set up using the main drill hall in 2331 (St Ives) Squadron RAFAC HQ. This building used to be the old Station Survival Equipment Flight, which has the old brake chute drying tower complete with huge fans in the floor and ceiling.

On the Saturday they rigged up the masts to take a full-size G5RV. This, along with the Club’s Icom IC-7200, LDG ATU and a 30A power supply; comprised the complete station and operation could start. The cadet doing the logging learned her new skill during Exercise Blue Ham 19 in March (reported in PW’s June News pages).

Thanks are due to the RAF Wyton Station Commander, Cadets and Staff from Beds & Cambs Wing RAF Air Cadets and the HARS Club Members who dedicated their time, effort and resources over the two days.

The photo shows the HF station manned by David M0VTG and Emelia, one of the Cadet loggers.