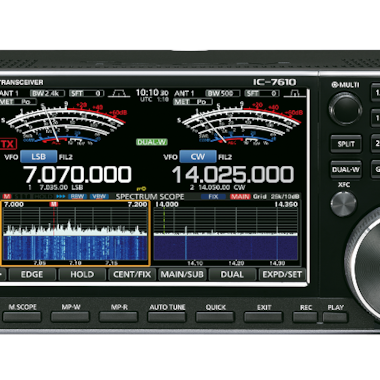 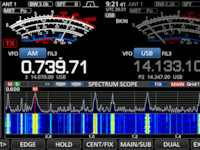 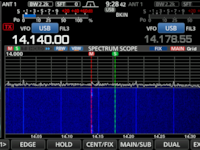 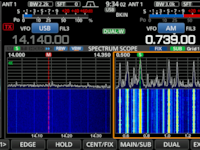 A New Toy for Christmas! Andrew Barron conveys his impressions of the new Icom IC-7610 SDR transceiver, from the point of view of an SDR user.

I have been using software-defined radios for a few years now, and I really didn’t need another amateur radio transceiver. But I found the offer of a ‘mint’, near-new, Icom IC-7610 transceiver irresistible and so, I bought myself an early Christmas present.

The IC-7610 was introduced to the world in May 2017 and became available for purchase late last year. The radio sits in the middle of the Icom range. It is a quarter of the price of the flagship IC-7851 transceiver, but nearly three times the price of the fantastically popular IC-7300 SDR.

I like my new radio a lot. But there are also some oddities and a couple of disappointments. Concentrating on the positives, this transceiver has almost all of the features that you could ask for in a ham radio transceiver.

The radio also includes an automatic antenna tuner. Because the radio is a direct-sampling SDR, the received audio sounds great, and it has excellent noise reduction and noise blanking filters.

You even get an automatic notch filter (Fig. 1).

The radio offers a general-coverage receiver, which can tune from 30kHz to 60 MHz. There are CW, SSB, RTTY, PSK, AM, and FM modes. For each mode, the FILTER button can cycle through three pre-defined filter bandwidths. You can adjust each AM filter from 200Hz to 10 kHz. The FM bandwidths are not adjustable, but you have a choice of 15, 10, and 7 kHz. This should suit most requirements. Each CW and SSB filter is adjustable from 50Hz to 3.6kHz, in 25 Hz steps.

Other useful functions for short wave listening are the two completely independent (and identical) receivers, each with its own panadapter display. There is storage capacity for up to 99 memory channels, a programmable scanner, and the ability to record the signals you hear, onto either an SD card or a USB stick.

You can also take a screenshot of the display, which might be handy if you want to e-mail someone an image of a signal you are seeing on the panadapter (Fig. 2).

I was a little surprised that the eleven band buttons could not be used to directly enter a frequency, but you can do that easily, via the touchscreen.

There are three different metering options. You can have large conventional looking ‘panel’ meters or a space-saving choice of an ‘edge-read’ meter or a ‘bar’ meter. The meters change format to accommodate other things on the screen, such as a larger panadapter display, twin panadapter displays, or one of the many sub-menu screens. For receiving purposes, there is an ‘S meter,’ but there is no option to display the received signal strength in dBm.

The two receivers are sensitive, and they have excellent performance figures. Other reviewers have measured an MDS (minimum discernable signal) sensitivity of around -134 dBm on CW in a 500Hz bandwidth and an RMDR (reciprocal mixing dynamic range) of 114dB at a test tone spacing of 2kHz.

The combined lab results place the IC-7610 at number five on my list of top 20 receivers and number six on my list of the top 20 transceivers. It sits at 15th position on the Sherwood Engineering table, which lists receivers in order of their narrowly-spaced 3rd order dynamic range performance.

The radio supports a sort of ‘diversity reception’ function. You can lock the tuning of the Main VFO and the Sub VFO together and assign each receiver to a different antenna. This lets you listen to the signals received from both antennas at the same time. If you are using headphones you can split the audio so that the Main receiver is heard on the left and the Sub receiver is heard on the right. Unfortunately, you cannot use that capability with the radio’s internal speaker or with the rear panel speaker jacks.

While useful, this option is not ‘real’ diversity reception, as implemented in radios like the ANAN-800DLE, which has the added ability to change the phase relationship between the two received signals. Changing the phase relationship means that you can ‘align’ the signals so that they emphasize a wanted signal, at the expense of noise and interference. Alternatively, it can be used to perform noise cancellation on an unwanted interference signal, thus improving the signal to noise ratio of the wanted signal.

The radio is very nice to operate, and it has excellent performance all round. The receiver is especially good. I do like the squelch function. You don’t have to listen to the noise, but you won’t miss a signal when it arrives.

Moreover, I love the voice keyer. You can record up to eight voice memories and use them to key the transmitter when using any of the voice modes.

Recording the macros is a breeze. They can be triggered from the touchscreen or from the function keys on an external USB keyboard or an external keypad plugged into a jack on the back of the radio.

The internal RTTY decoder is excellent and the twin peak filter, specially designed for RTTY, is very effective. I worked a few stations in the CQWW RTTY contest, using the RTTY message macros for sending, and the internal decoder, and it worked very well. A log can record all of the text displayed on the screen.

There are separate sets of message macros for the CW, PSK, and RTTY modes.

You can set whatever band edges you like, up to the maximum panadapter bandwidth of 1MHz (Fig. 3).

The IC-7610 is an awesome radio. It is a joy to use, and there are many features that I like immensely. I have a few minor niggles and a couple of disappointments, such as the lack of proper mouse implementation. On the IC-7610, you are only able to use the computer mouse within the spectrum and waterfall display area.

The other point I noted is that, although you can change the span of the panadapter display, you can’t change the gain. The display is fixed at 10dB per division and it can’t be changed or stretched (Fig. 4).

Some of the previous reviewers and commentators have criticized the logic behind the placement of some function buttons on the transceiver (CLEAR, TIMER, QUICK), and I agree with them.

The radio can display two clocks. One is showing local time and the other one UTC or another time zone. For some reason, the second (UTC) clock is only displayed when you have the large meter display active. Despite the display area still being available, it disappears when the small bar type meters are in use.

You can view the display on an external monitor. It looks big, but the resulting resolution is not as good as an SDR application like PowerSDR.

My final complaint, I promise, is the way that the audio from the two receivers is managed. The radio only has one internal speaker, but it has two independent receivers. It would have been nice if the radio had a speaker for each receiver. This splitting of the two receivers into left and right audio channels is implemented on the headphone jack, but unfortunately not on the rear speaker jacks.

Overall, I like the IC-7610 transceiver very much. I can put up with the minor oddities and disappointments although I really hope that Icom improves computer mouse operation in a future firmware release.

It can’t be that hard to make the mouse work like a finger pointing at the touchscreen, and most of the required functionality is already there.

Although this radio is aimed at the amateur radio market, I am sure that a new shortwave receiver based on the same platform would be appreciated by those that don’t need the capability of the IC-R8600 receiver.