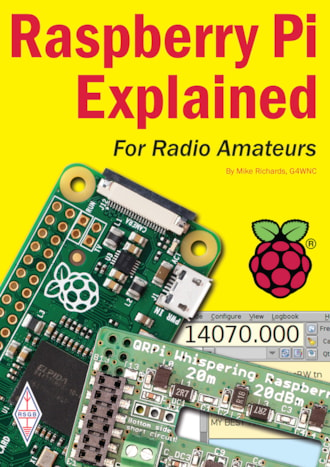 The Raspberry Pi series of low-cost single-board computers were developed to promote teaching of basic computer science in schools. However, they have become extremely popular and are selling well outside the original target market including in Amateur Radio. Well known expert Mike Richards, G4WNC sets out in Raspberry Pi Explained to provide the basics of the Raspberry Pi, alongside making them work in an amateur radio context.

Raspberry Pi Explained guides you through step-by-step instructions to get the Pi working for you. Once you've learnt the basics, Raspberry Pi Explained is packed with comprehensive details of the Pi hardware and Linux operating system, including all those hard-learnt tips and tricks you need to make the most of the Pi. Mike also guides you through the installation of many of the popular radio related software packages. Readers will find detail of using WSPR, Dire Wolf, FLDIGI, WSJT-X on a PI alongside Software Defined Radio (SDR) applications such as GQRX, Linrad, Quisk to name just a few. Those without a working knowledge of the Raspberry Pi are not forgotten and they will still find Raspberry Pi Explained a vital reference that is packed with tips, advice, projects, programming and much more.

Raspberry Pi Explained is aimed at the beginner through to the experienced. So if you are considering using a Raspberry Pi for Amateur Radio but don't know where to start or perhaps you already have a Raspberry Pi and need help to getting going, then this is the book for you!